117.5 cm high oaken Saint Mary’s sculpture “Madonna on a Crescent Moon” of the collection of Museum of the History of Riga and Navigation was also known as Madonna of Riga and “Saint Virgin with the Infant Jesus”. The opportunities of 3D scanning allow looking at the rounded-wood sculpture from all sides and researching its details.

Madonna – the witness of the historical events of Europe

The cult of St. Mary was extremely important in catholic Riga, as well as in all territory of Livonia that was also named as the “Land of Mary” – Terra Mariana. In the middle Ages, pilgrimage to Livonia to summon the defence of the Virgin Mary was very popular – all sins were forgiven after it. The road to the Livonia was full of challenges and equated to the pilgrimage to the Jerusalem. St. Mary was depicted in almost every altar in Livonian churches. Those masterpieces in Riga were especially qualitative, because in such a wealthy trader’s city the best masters could be employed. However, only assumptions and speculations exist about the first initial location of the Madonna of Riga. In publications, either the place under the bell tower of the Church of St. Peter or one of the four altars of Our Lady in the Dom of Riga, that was consecrated by the Saint Mary, have been mentioned as a location of the sculpture.

Riga always played the role of the bridge between the West and East, where the newest ideas, taste in fashion, directions in art and other novelties arrived. In 16th century, Riga was one of the first cities, where Martin Luther’s ideas of the Catholic Church Reformation spread. Influenced by those ideas, so called “church ravages” started during which the church art masterpieces were destroyed, damaged or moved. In 1524 Madonna of Riga was moved to the Big Guild whose patroness she was. In fact, the sculpture was also called “the docke of the Big Guild”, where the “wordplay” is used: the old Swedish word dokke in English meaning “the doll” is associated with the dokman – the chairman of the Big Guild.

In 19th century Madonna of Riga was first perceived as a piece of artwork – in 1858 it was restored and researched. In 1930 the Board of Monuments entered the wooden sculpture into the list of monuments under the State protection, specifying that the figure should not be taken abroad, sold, destroyed, restored or altered in any way without the permission of the Board. In 1936 all property, as well as the sculpture Madonna of Riga of the Big Guild was overtaken by the Chamber of the Commerce and Industry of Latvia. The Soviet regime eliminated the Chamber, and Madonna of Riga was placed in the Riga City History Museum, which now is known as Museum of the History of Riga and Navigation. During the German occupation in 1944 Madonna of Riga was taken to Nazi Germany. After the war, this sculpture from Riga was found in the Saint Anna’s museum of Lubeck, where it was restored and exhibited in 1951. According to the research of the Museum of St. Anna, the sculpture was made approximately by 1488.

On the 1st of October, 1999 by the initiative of the Museum for History of Art and Culture of Lubeck and Administration of the Art and Culture of Lubeck, the Burgomaster of Lubeck handed the returning documentation of the illegally obtained sculpture of Madonna of Riga to the Ambassador of Latvia in Germany. In honour of the 800th anniversary of Riga City on 18th of August, 2001, the representatives of Lubeck returned the sculpture of Saint Mary to the Museum of the History of Riga and Navigation, and nowadays it is viewable for the visitors.

Madonna of Riga – communication without the words

The author of the sculpture Madonna of Riga is unknown, but art historians have had some hypothesises. Boris Viper (1935) attributed it to the epigones of the of late 15 century’s Lubeck school carver and artist Bernt Notke (Bernt Notke, app. 1440 – 1509). The late 15th century was the time of decline of the late Gothic. Art historian Elita Grosmane (2005) indicates that Madonna of Riga is stylistically heterogeneous, similar to other wooden sculptures of the 15th century. The balanced calm depiction of the faces of Our Lady and the Child is a sign of the Renaissance approaching (early modern times), and in contrast – the sharp detail of the shoe and the folds of the dress recalls Gothic that represents the Late Middle Ages.

The aim of the Medieval Church Art was not only to give visual pleasure to the prayers, but also to communicate without words, only with symbols, images and characters with the church visitors, most of who couldn’t read. To the coevals, the image of the Saint Mary was intimate and understandable, but nowadays you need special knowledge to understand communication with symbols.

The image of Madonna on a crescent moon was familiar to the Christians from The New Testament’s Book of Revelation (12:1, 2 & 5), where the Apocalyptical Madonna (Greek: ἀποκάλυψις — “revelation, disclosure”, the one that tells about the end of the world, or big events, changes) is described: And there appeared a great wonder in heaven; a woman clothed with the sun, and the moon under her feet, and upon her head a crown of twelve stars, who protects the child from desires of the old snake, Satan, or the Devil.

Please, pay attention to the silver-blue coloured dress of the sculpture and the crown on the head of Madonna that simultaneously symbolises Saint Mary as a Queen of the World and loving mother – this is indicated also by colours of the dress of the Saint that nowadays can be observed only in fragments. The dress and the lining of the sculpture of Madonna of Riga was raspberry red that symbolises her love for the son and the passion of the Christ. Her cape is golden with red inside and blue outside, where blue is the colour of the sky, fairness and innocence. On the cape, the Words of angel Gabriel are engraved: – AVE MARIA GRATIA PLENA (Hail Mary, full of grace, the Lord is with thee), but till nowadays only some of the letters remained AVE M[.. .. .]L. The pre-mentioned phrase is the remainder of the Annunciation of the Mary.

What are sculpture symbols about?

The crescent moon. The main symbol of the Madonna of Riga is a crescent moon, that symbolises impermanence and the baptism as well as the Chastity of St. Mary, that was also indicated by the inscription AVE MARIA…, that stands for the 25th of March – Lady’s Day, the Feast of the Annunciation, when according to the New Testament, Saint Mary was found to be with child by the Holy Spirit (Matthew 1:8).

The symbol of the moon in European art appears starting the 12th century, but becomes more popular after the events of the Crusades. After the defence of the Ottomans against the Christians on the7th October (Feast of Our Lady of the Rosary) 1571 during the fight of Lepanto, the moon is pictured only upwards, as a defeated enemy’s political and military standard. St. Mary became to be depicted on the crescent moon or the crown of stars, which shows an evil face with an open mouth. The image of the Madonna sculpture of Riga is also depicted on an upward crescent moon she tramples under her feet. In the 17th century, the symbol of the crescent moon was replaced by a snake as a symbol of sin, or a symbol of the sun.

Face on the crescent moon is linked with “face of the enemy” – the world of evils, demons, the traits of evil that has been defeated, and now the crowned royal Madonna triumphs. The “face” symbolizes all kinds of the enemies both spiritual and political enemy of Christendom. The “face” is sometimes also associated with Adam, through whom the sin came into the world; St. Mary overcame the original sin through childbirth.

The bird in the hands of Jesus. The Madonna of Riga holds in her hands little Jesus, who plays with a bird. Unfortunately, the image on sculpture was preserved only partly. Previously the researchers wrote that this bird is a dove or the forest pigeon that symbolizes the human soul, or the Holy Spirit by who St. Mary gave birth to Jesus, the incarnation of God (Luke 3:21-22). However, according to the analogue examples in European art and their explanation, the imaged bird most likely is a goldfinch (Carduelis carduelis). A goldfinch is the symbol of the passion of Jesus Christ, this small bird likes to hide among thorns and has a red head that reminds of the crown of thorns of Jesus Christ and the head, stained with the drops of blood, – Jesus‘ suffering and His redemtive death by crucifixion.

In Latvia, there are about 30 wooden sculptures preserved from the Middle Ages, but there are no other standing sculptures of Saint Mary. Sculptures similar to the Madonna of Riga are found in other places in Europe, especially in Northern Germany. However, another fully analogue sculpture is not known. The Madonna of Riga tells its unique story playing with symbols. Mary holds little Jesus on her hands, gently looking at her baby. She has smashed evil with her legs; it is defeated and at the moment there is no danger. But a goldfinch – the redhead bird in the hands of Jesus – is not a toy; it points to the future death on the Cross. This will be the tragedy to the mother, but through the sufferings Christ becomes the Saviour of the World and Mary will be dormited and crowned as a Queen.

You are welcomed to take a look at the unique Madonna of Riga in the Museum of the History of Riga and Navigation. 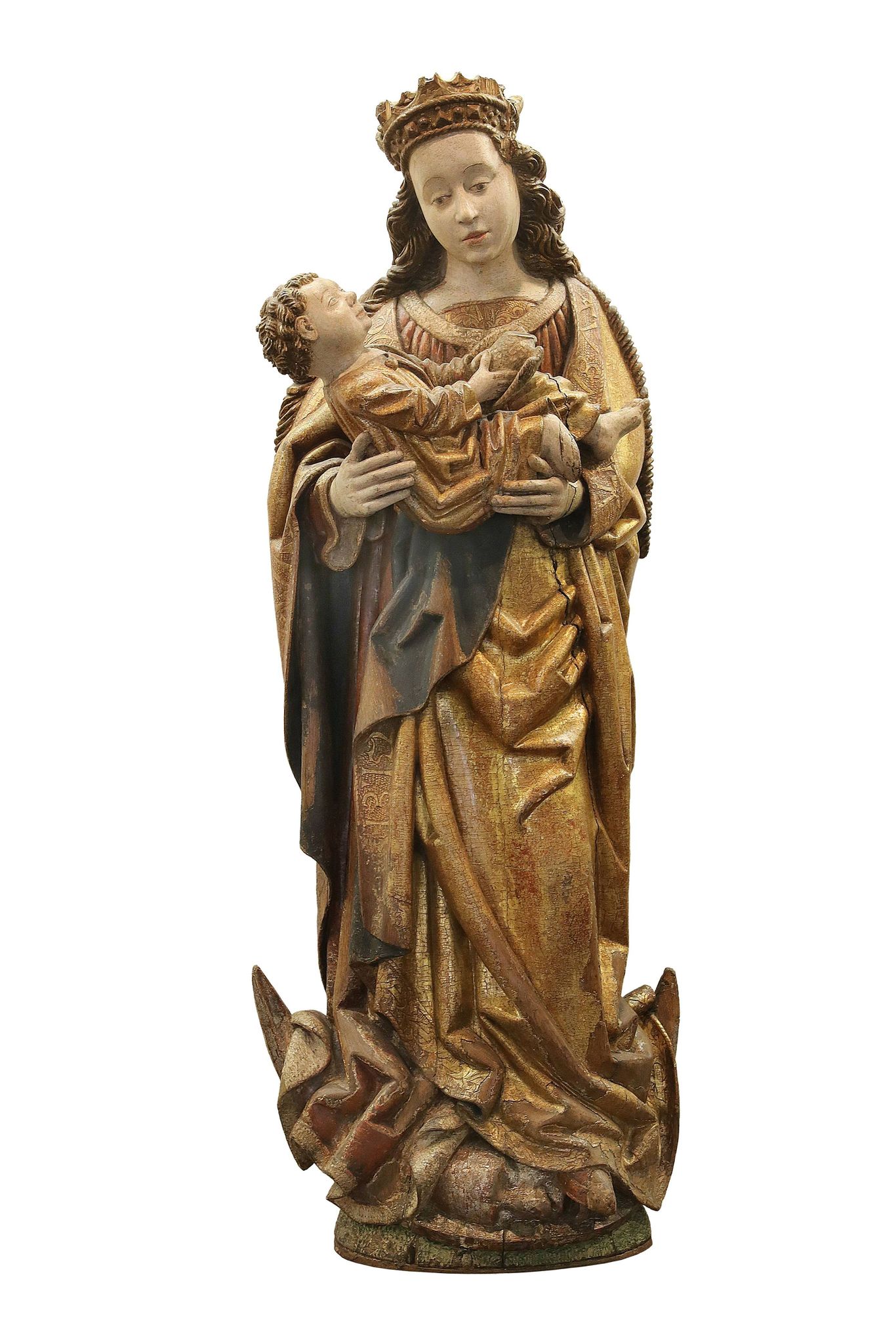 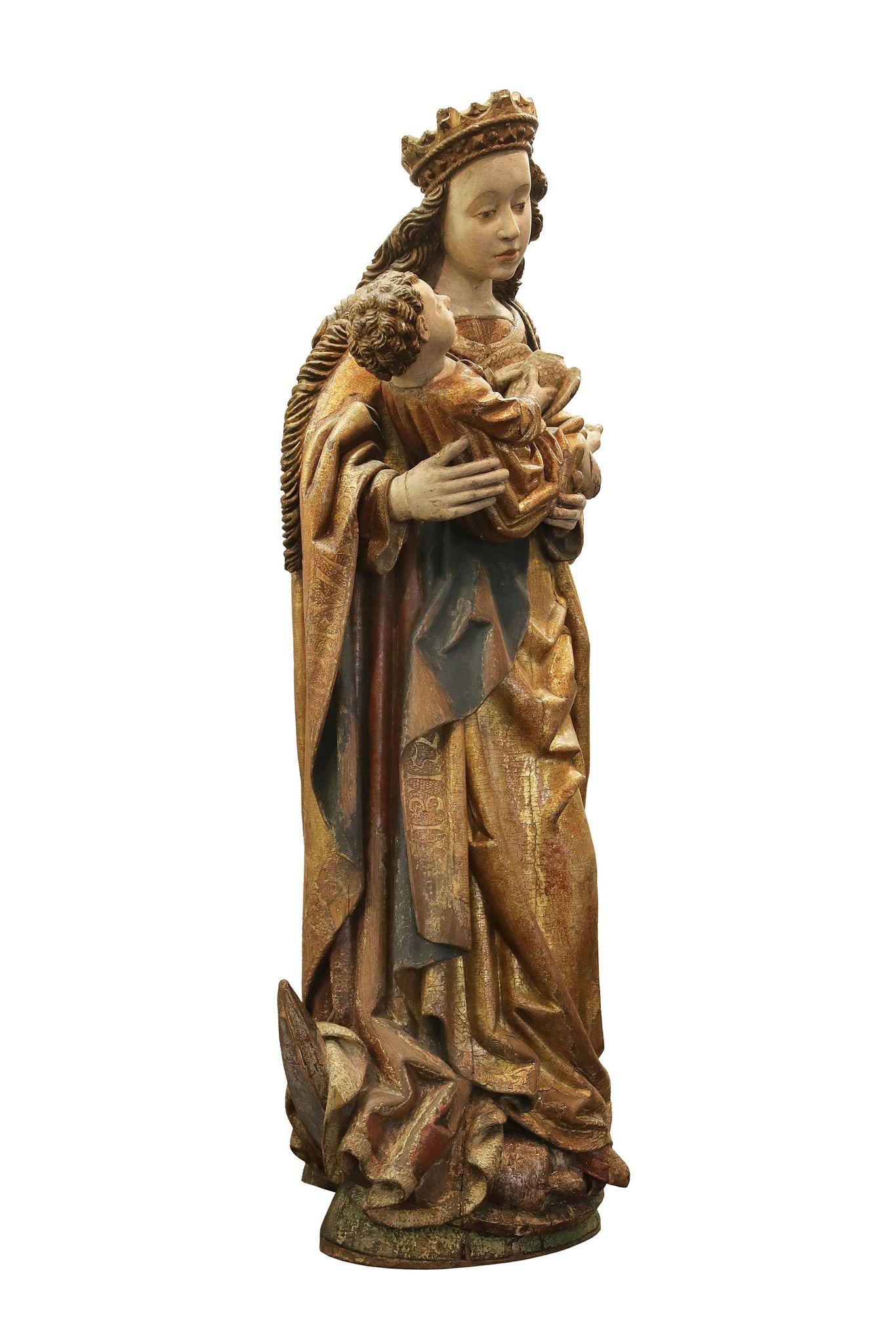