Tobacco pipes in the archeological collection of the museum

Archaeological research in Old Riga and its immediate surroundings discovered a rather impressive number of 17th-19th century ceramic ware – fragments of clay pipes, numbering about 20,000, which indicates the widespread practice of smoking among the townspeople.

Most of the pipe finds are fragments of broken stems, while about a tenth are that of the head and its fragments.

Pipes have been found throughout Old Riga, as well as in several research sites outside it. 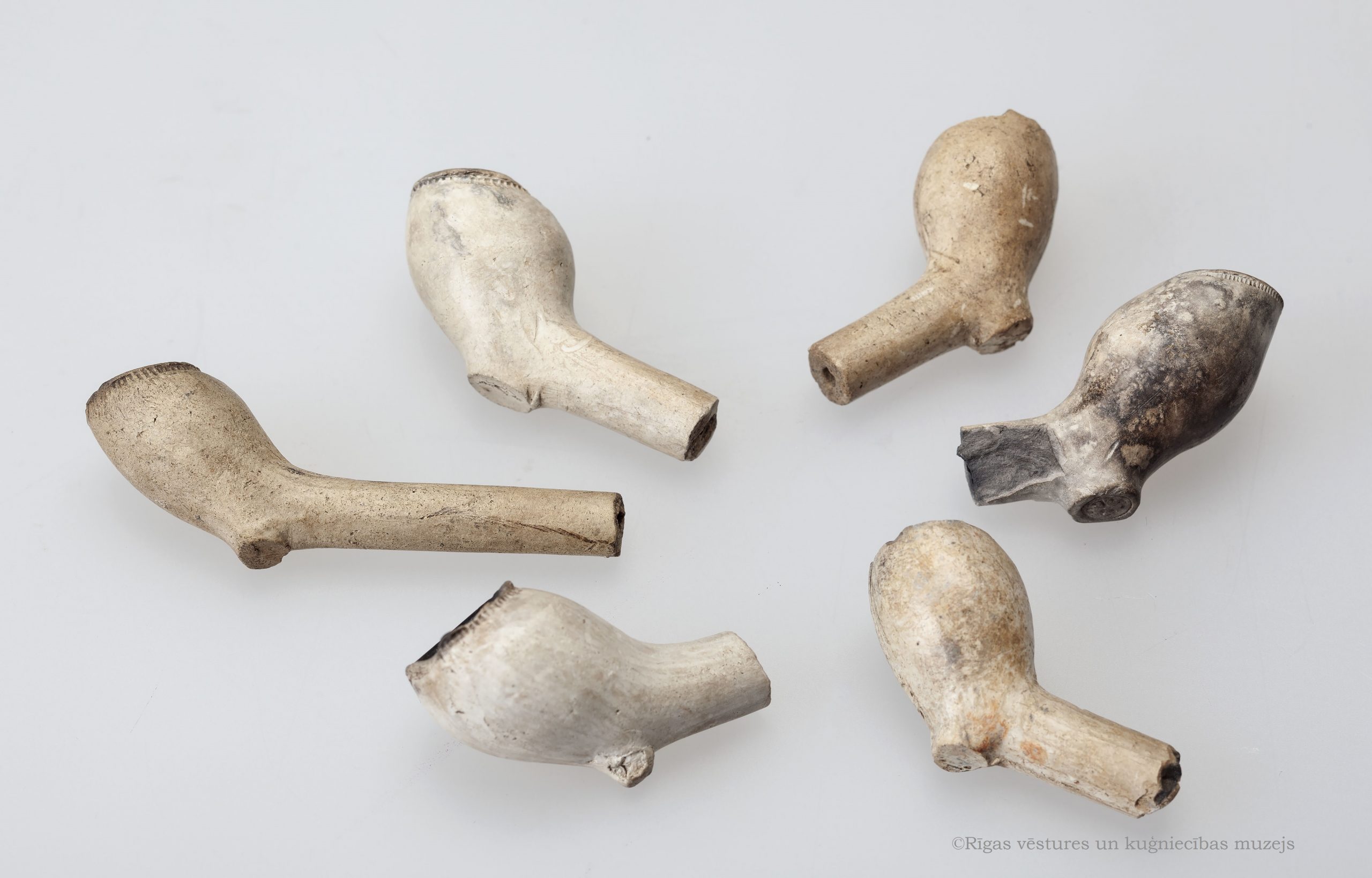 Pipes. White clay. Great Britain or the Netherlands. Early 17th cent. Height: 2.65-3.2 cm, maximum width: 1.5-1.9 cm. Some of the objects can be seen in the museum’s permanent exposition.

Archaeological finds show that the habit of smoking reached Riga relatively early: the oldest finds of white clay pipes date back to the first decades of the 17th century. The “first generation” pipes are small in size with an indistinct, split-ball head. 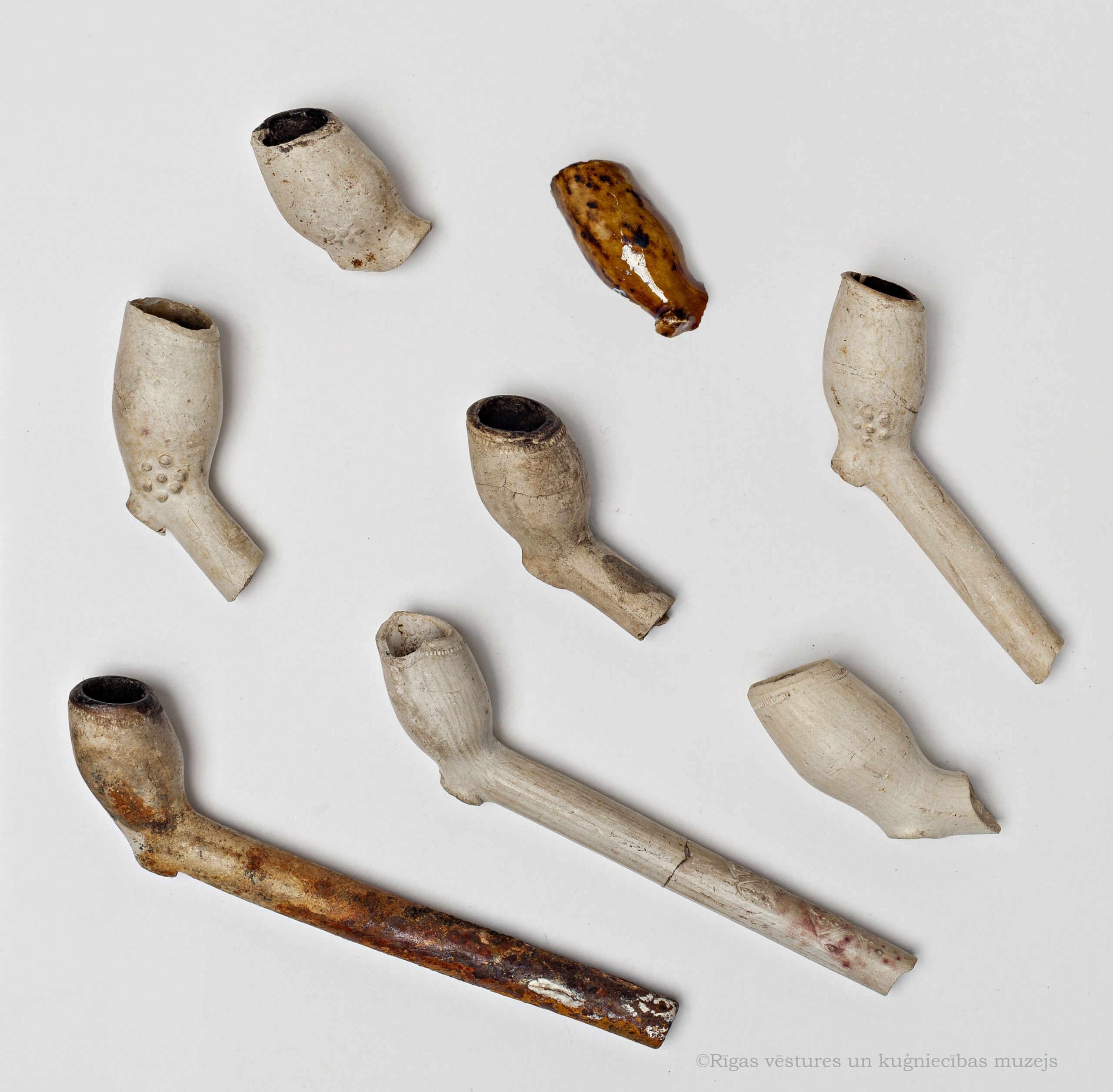 Starting from the second quarter of the 17th century, the finds of white clay pipes in Riga are massive. Pipes imported mainly from the Netherlands – Holland. 17th century Dutch products have a biconical head shape and relatively thick stems. There is often a marking on the stem of the pipe – a master’s mark. The side or handle of the pipe head may have a decorative decoration. In rare cases, the pipes are covered with glaze. 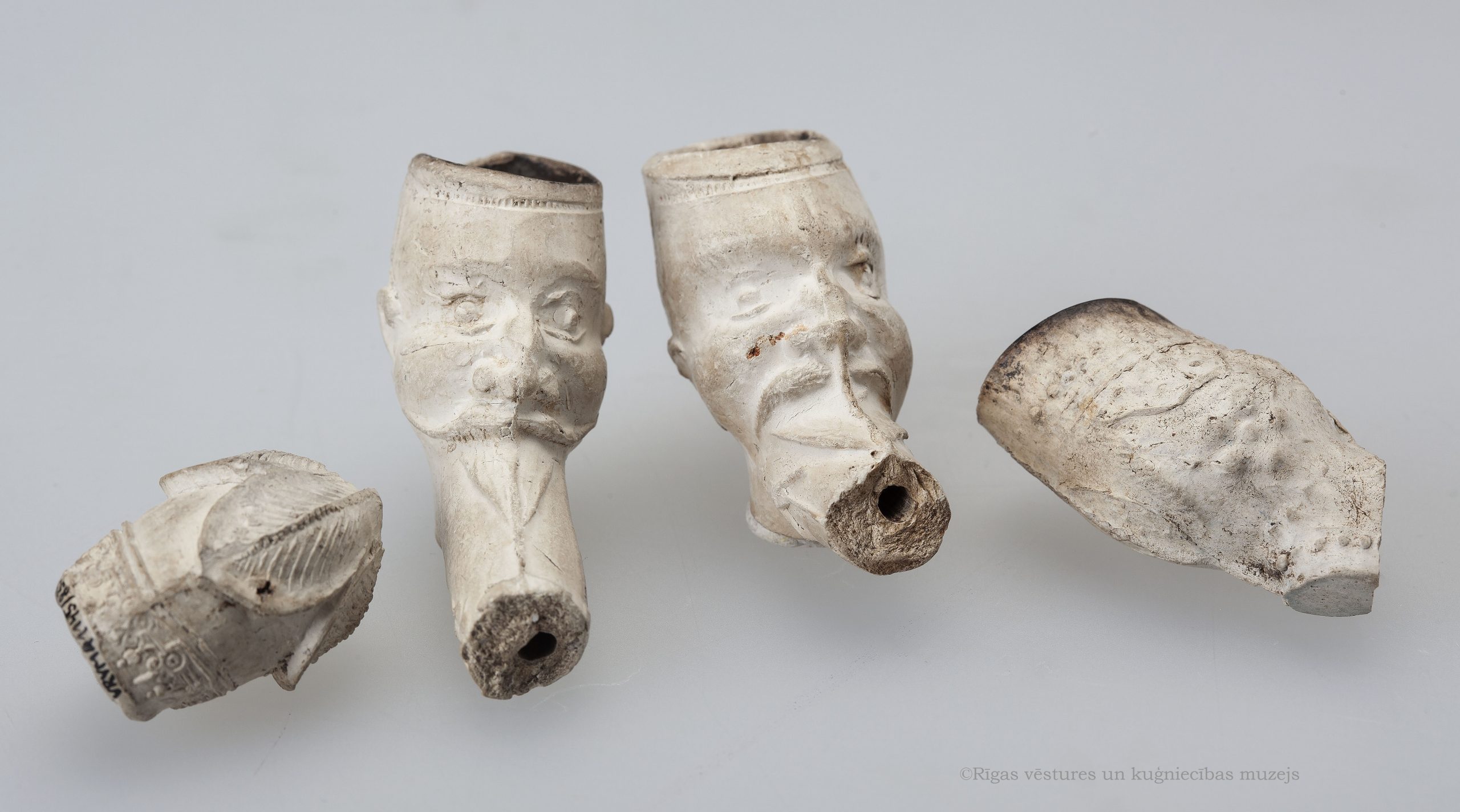 Pipes. White clay. The Netherlands, Holland. 2nd quarter of the 17th century. Height: 3.7 cm, maximum width: 1.9-2.1 cm. Some of the objects can be seen in the museum’s permanent exposition.

Among the pipes imported from the Netherlands in the 17th century, luxurious pipes with ornaments are rare but common. One group is t. s. Jonah’s pipe in the form of a portrait of a bearded man, whose decor is associated with the biblical legend of the prophet John. The second group is t. s. baroque pipes with a rich plant ornament on the surface of the head. 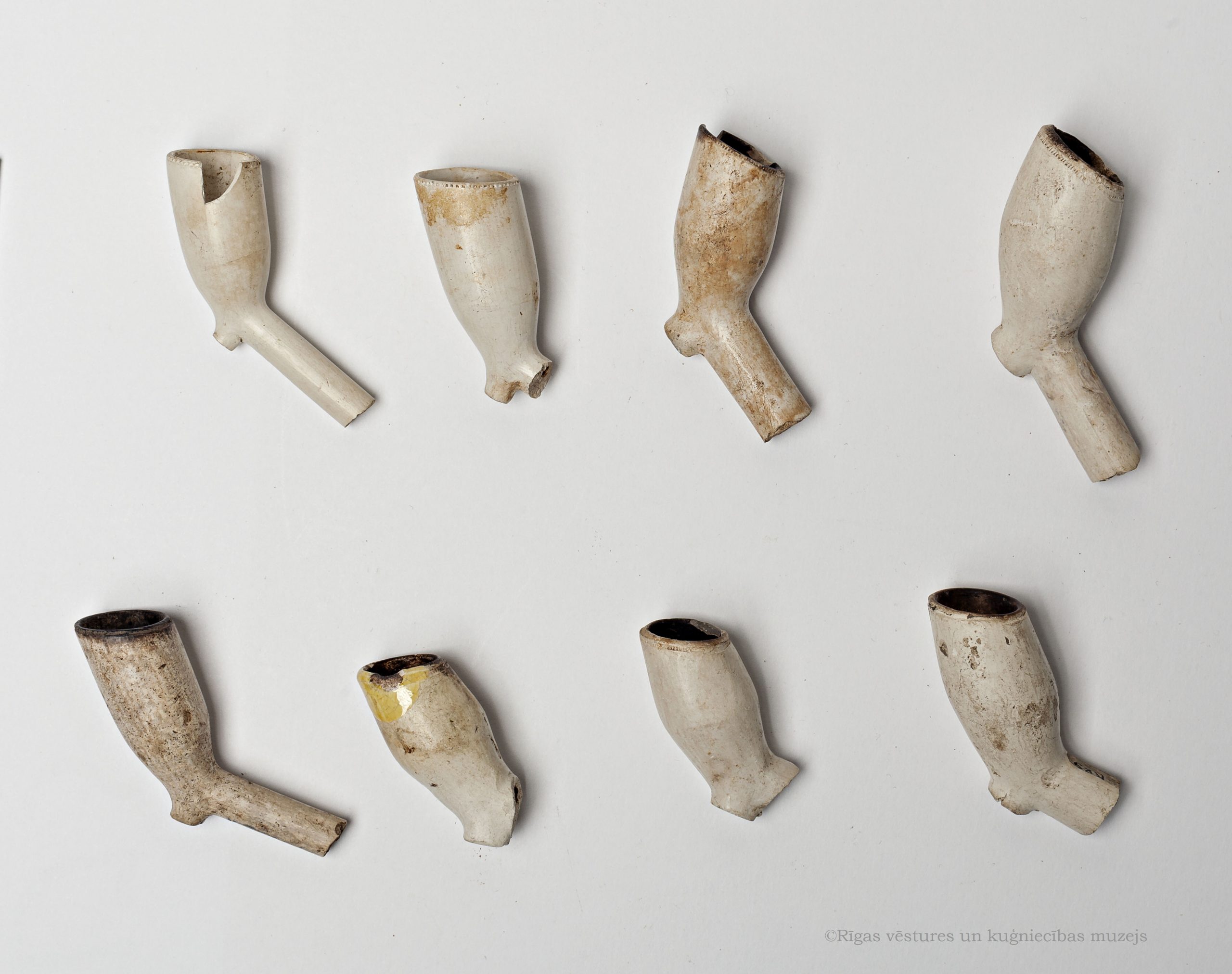 In the second half of the 17th century, Gouda became the most important center for pipe production in the Netherlands and throughout Europe, maintaining its leading position until the middle of the 18th century. The material of the Gauda pipes clearly shows the changes in the shapes of the pipes in the late 17th and early 18th centuries. The pipes produced by Gauda are often marked, for many copies it is possible to identify the name of the potential master by the marking. 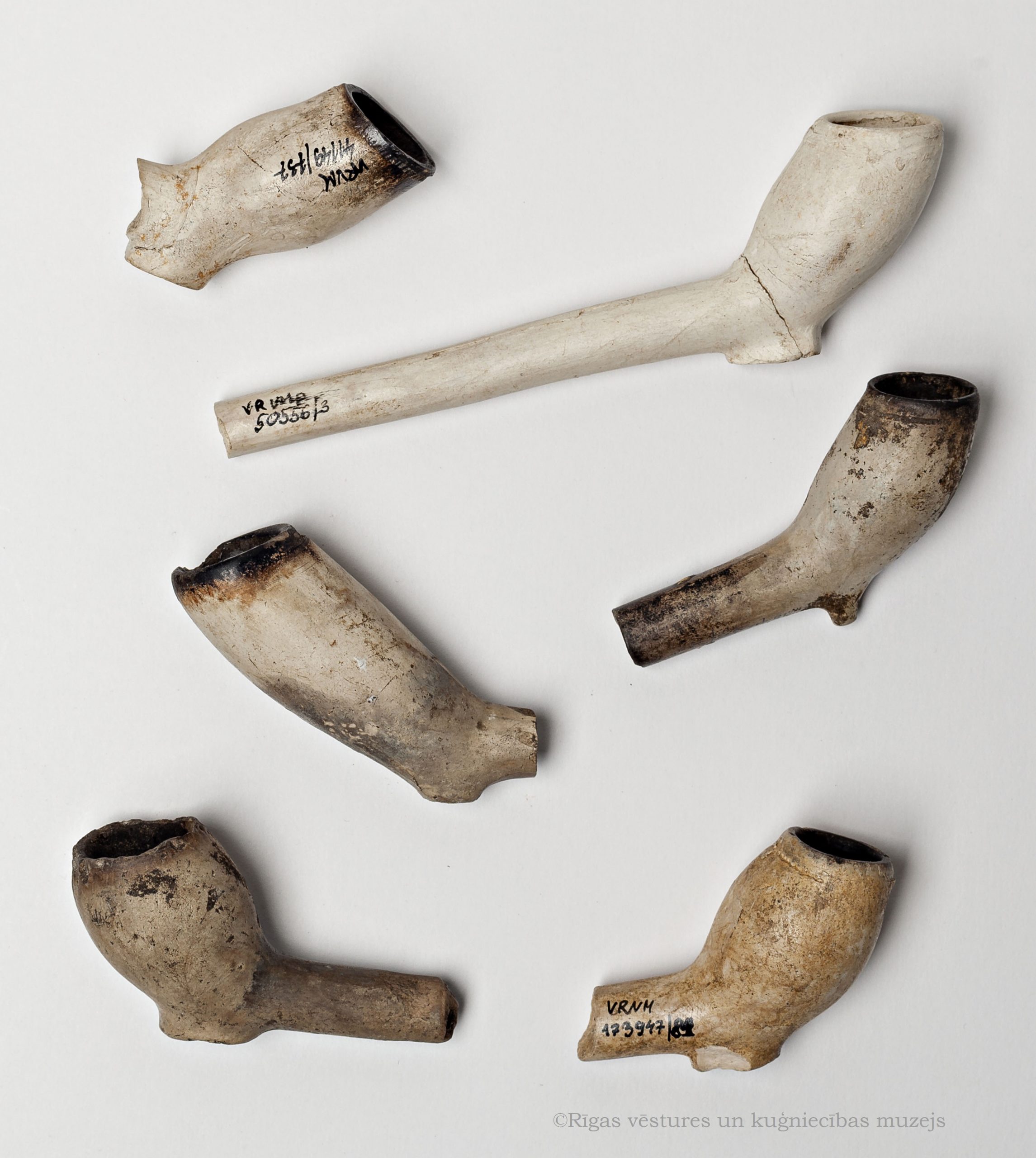 Among the pipes of the second half of the 17th century found in Riga are also pipes imported from Great Britain – England. The shapes of these pipe heads are more diverse, which is related to the specific traditions of each production region. 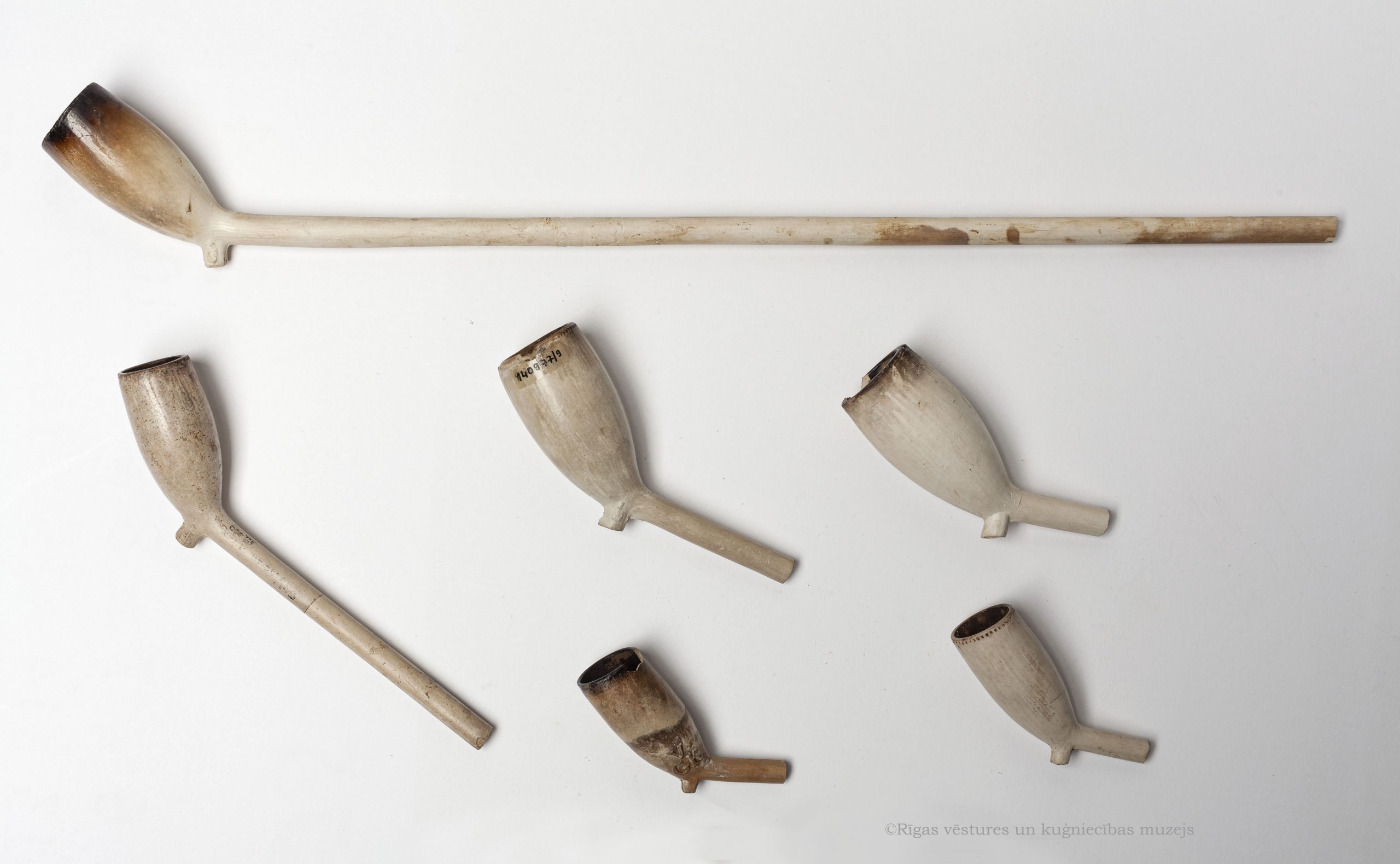 From the 1730s, Gauda, who was the determinant of style and shape, began making pipes with an oval head. This form was popular until the first half of the 20th century. Other manufactories in the Netherlands and continental Europe also began to produce pipes of that form. Not only the shapes of Gauda’s pipes were imitated, but also the marks of the masters. In order to protect their products, Gauda’s masters introduced additional labeling elements, but they were also often copied.

The 18th century fashion thing was pipes with a very long handle. It could reach a length of up to 1 meter. 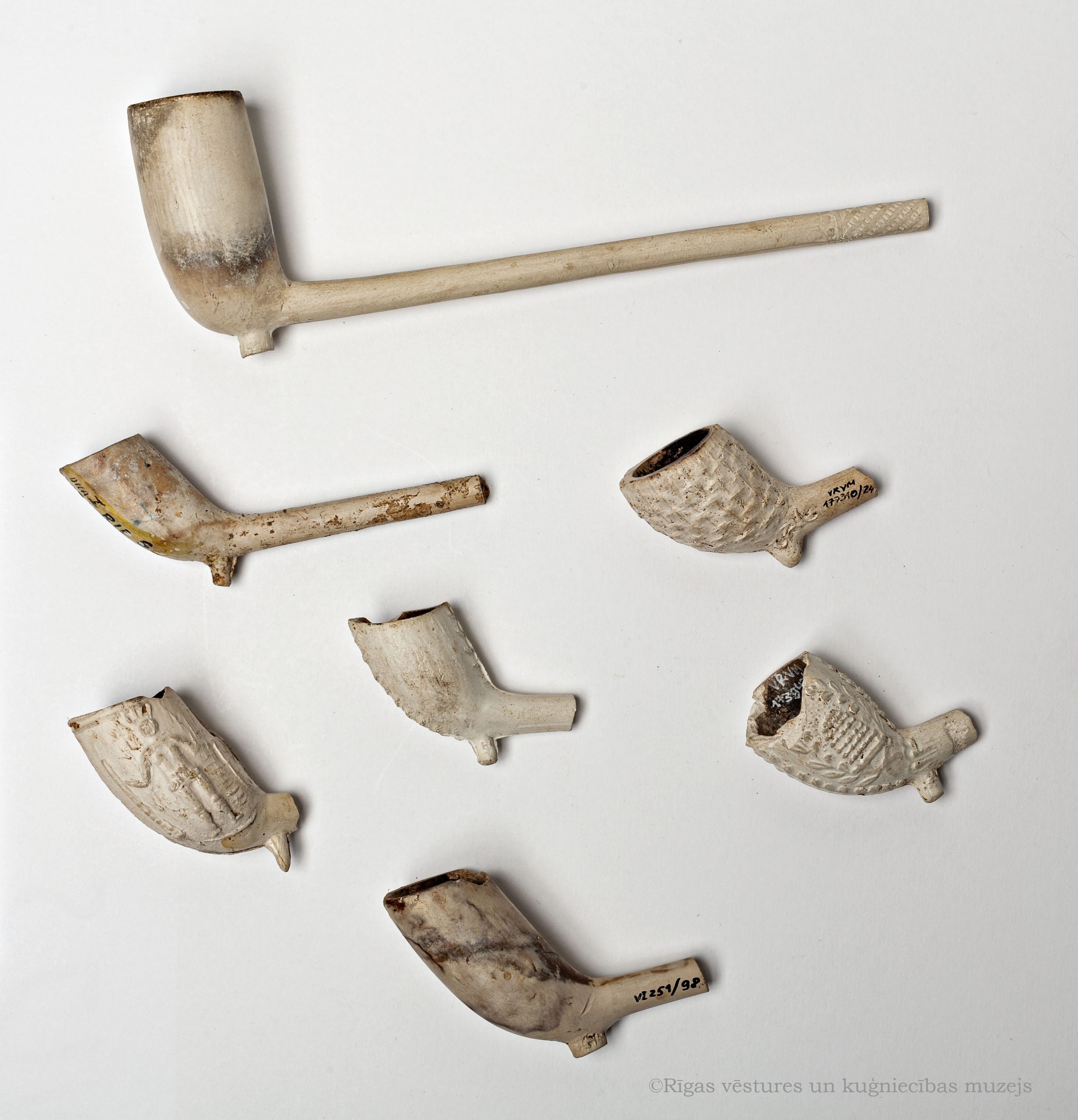 In the 18th and 19th centuries, the appearance of clay pipes became much more diverse. During this period, curved pipes were also produced in the Netherlands, Great Britain and other Western European countries. In the 19th century, it is becoming more and more common to have ornate pipes, the decor of which is made with a mold. 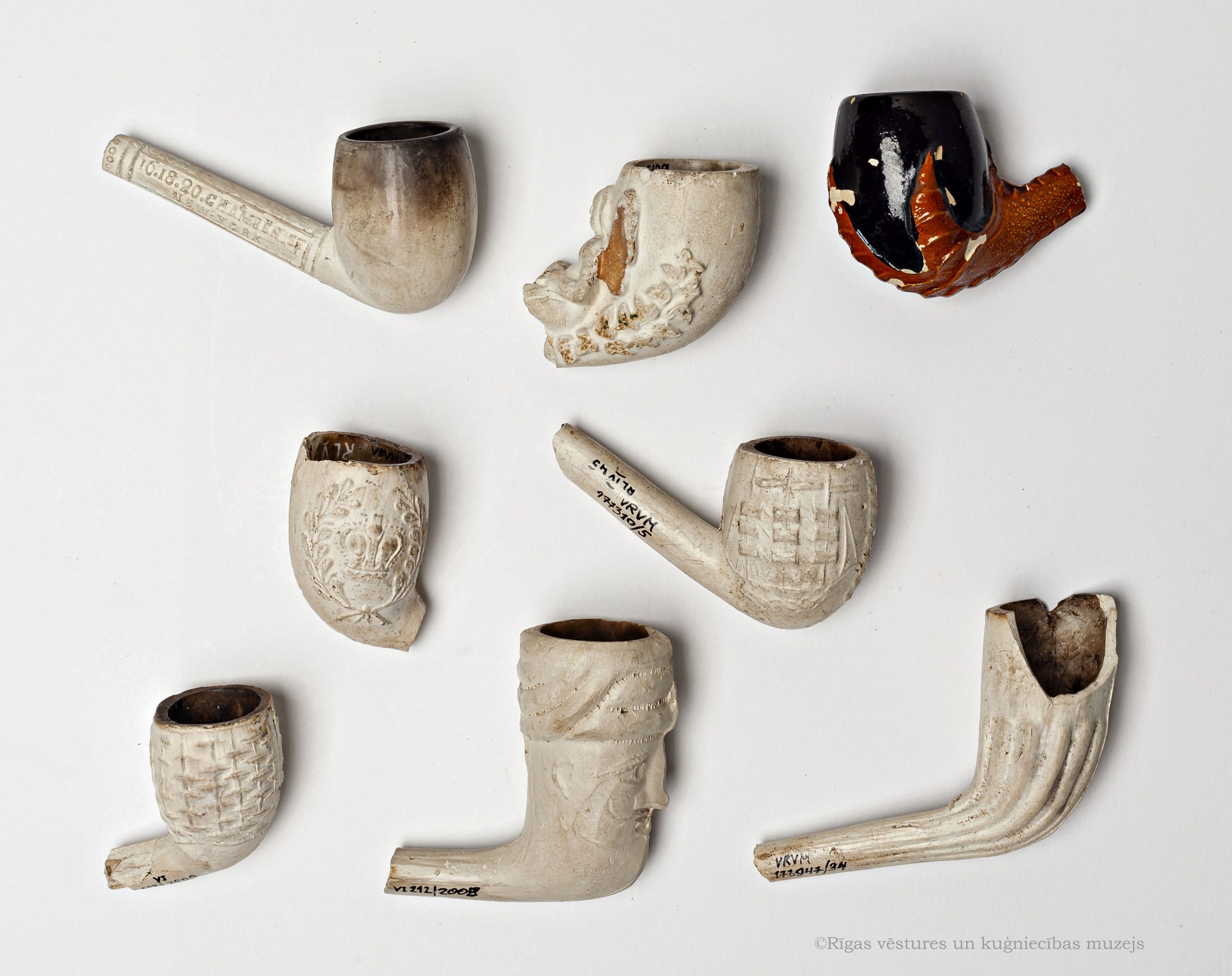 From the end of the 18th century, pipes with a rounded lower part of the head were widely produced. The number of clay pipes made in the 19th century and found in Riga is much smaller than in previous centuries. This can be explained by the increasing use of other smoking tools – cigars and cigarettes. Diverse decor was probably the way pipe manufacturers tried to attract customers’ attention to their product in a competitive environment. 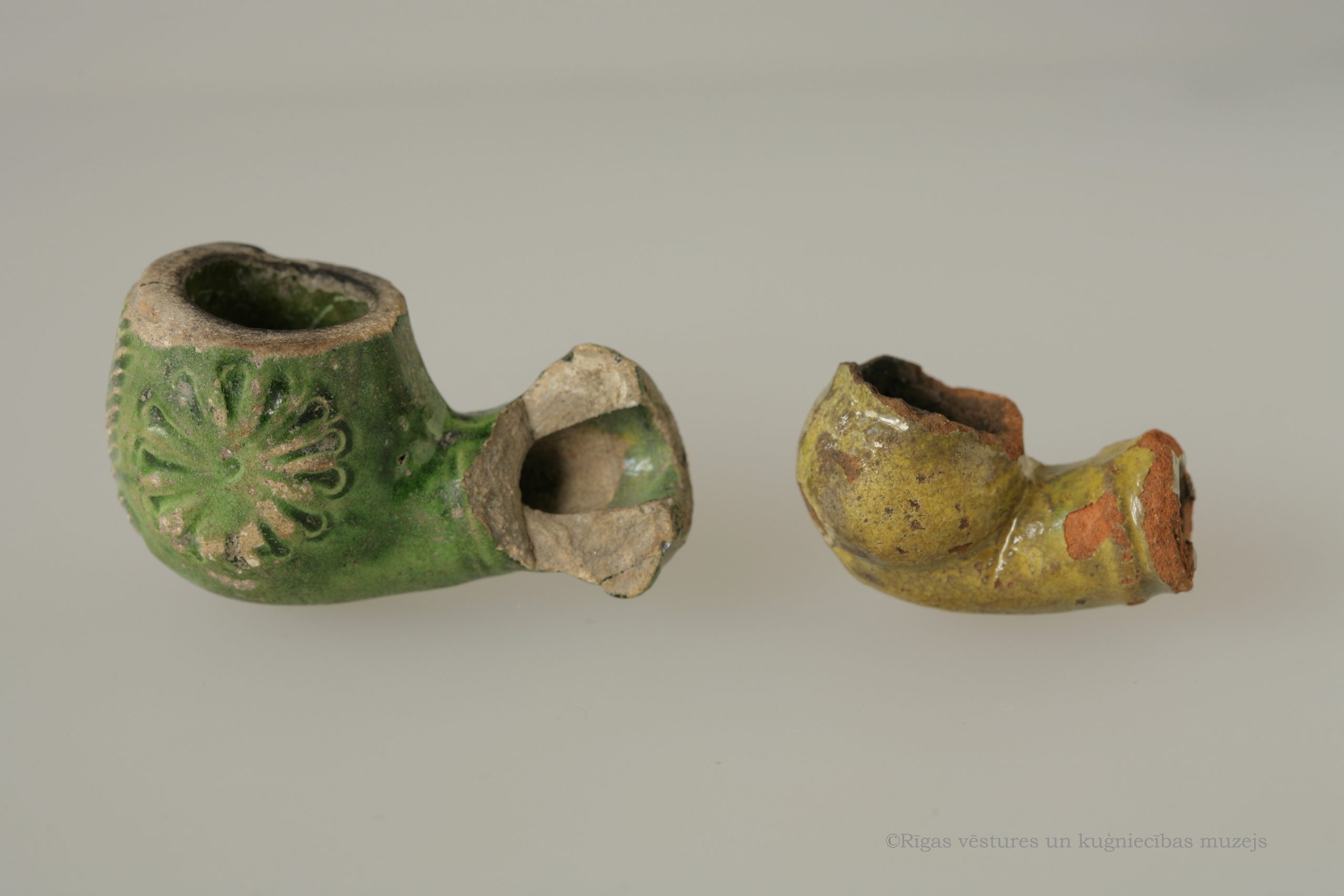 Regardless of the style of Western European pipes, pipes of a different appearance were made in the Middle East from the 17th century – with a massive cylindrical or faceted head and a short, wide handle. Smokers used them with a mouthpiece inserted into the opening of the stem. This tradition became popular throughout Southern, Central and Eastern Europe. Short pipes were less likely to break and were easier to transport. In the 19th century, the advantages of this form were also appreciated in Western Europe and began to be produced on a larger scale.

The number of folding pipes found in Riga is not large. They were most likely brought here as belongings of immigrants. Most pipes are made of red clay and are always decorated with embossed decor or glazed. The specimens found are more often intact or slightly damaged, which gives a complete picture of their appearance. 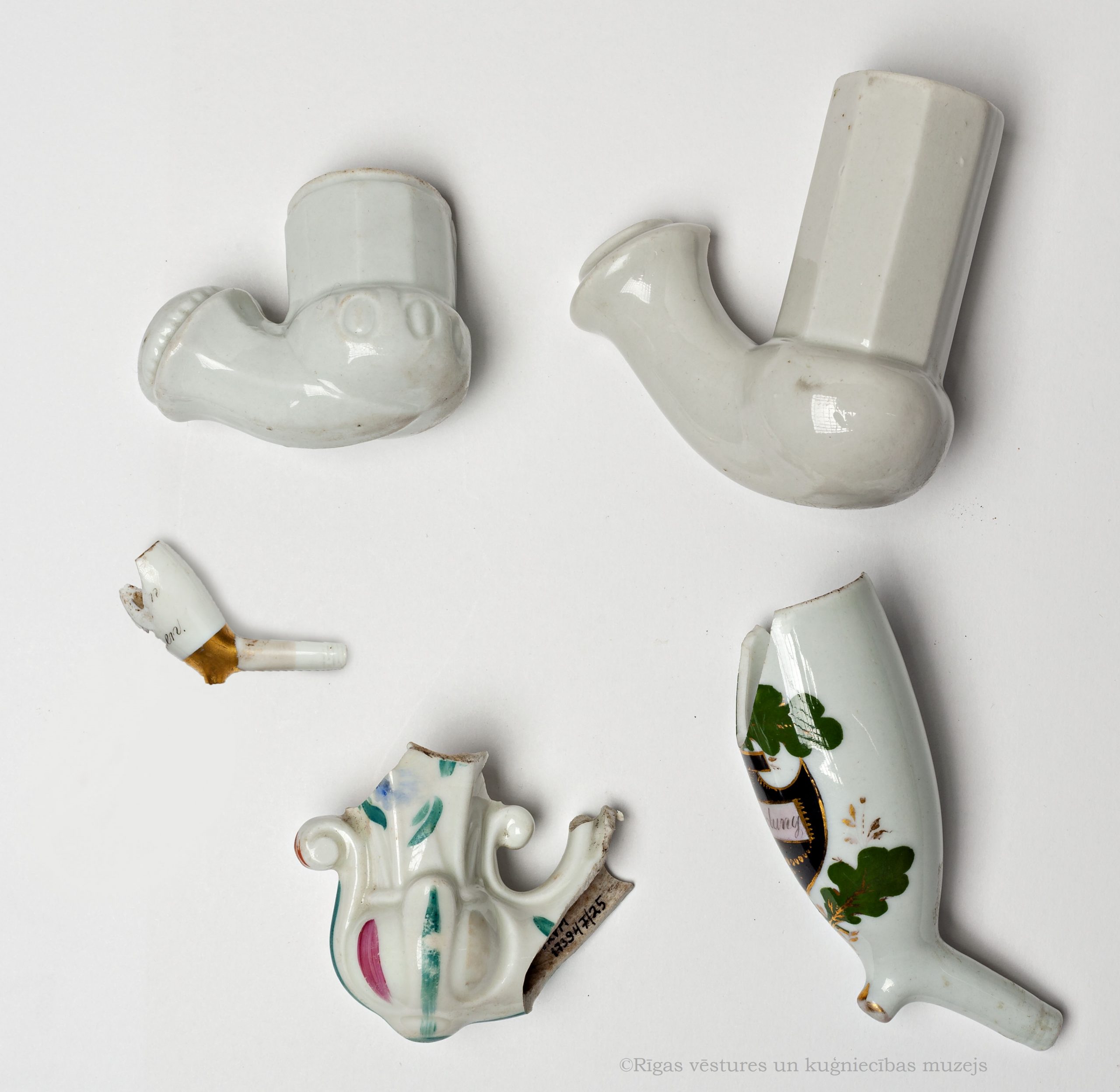 In the 18th and 19th centuries, pipes began to be made not only of white and red clay, but also of other materials. Porcelain, which was learned to make in Western European manufactories in the 18th century, proved to be a suitable raw material for making pipes. Porcelain pipes are short, foldable. The appearance of their head was modeled on two examples: as an imitation of the oval shape created in the Netherlands or as an imitation of the Middle Eastern style.

Author of the virtual exhibition: Ilze Reinfelde, Head of the Archeology Department of Museum of the History of Riga and Navigation.