Novelties of the 18th Century – Porcelain for Exotic Drinks

The large porcelain tableware collection of the Museum of the History of Riga and Navigation reflects the culture of savouring food and drinks at different times. The richly painted 18th century porcelain tableware testifies to the social status and tastes of the Riga elite and the Baltic nobility, as well as to the changes in eating habits in this century.

In the 17th century, due to the great geographical discoveries, the varieties of food imported into Europe expanded. One of the most significant novelties was the import of hot drinks – tea, coffee and chocolate. The popularity and spread of elite fashion beverages created new types of items and series of crockery designed specifically for the preparation and consumption of these drinks. Initially, these novelties were made of metal, majolica and stoneware, but in the 18th century silver and porcelain crockery came into vogue. The leading role in the design and decoration of tableware belonged to the Meissen porcelain factory, which in 1709 discovered the secret of hard paste porcelain.

The shapes and decors of porcelain ware were initially taken over from silverware and Chinese ceramic export samples. Gradually, Europe’s leading porcelain factories developed their own designs of wares in line with the fashion of the time and historical styles. Teaware – teapots and cups – were initially smaller than other hot drinkware because tea was expensive and was used economically. Special dishes for dry tea leaves to brew tea were usually placed on the table. In the 18th century, popular were square teapots with a lid in the shape typical of German porcelain.

The differences in the shape of tea, coffee and chocolate pots reflect the different ways in which these beverages are prepared. Coffee pots were always taller than other hot drink pots. To prevent the coffee grounds and tea dregs from getting into the drink containers, the spouts for teapots are modelled at the bottom of the body, while the spouts for coffee pots are placed relatively higher.

From the mid-18th century, pear-shaped coffee pots (Fig. 4, 5) and chocolate pots were typical of the Meissen porcelain, the latter always being smaller. A distinctive type of chocolate pots is the cylindrical vessel made in the Berlin porcelain factory around 1775. It has a horizontal wooden handle, modelled at the right angle to the spout (Fig. 6). The lid has a small round opening for inserting a chocolate stirring stick (molinet) and the lid opening was usually covered with a movable, artistically decorated bronze moulding. The wooden handle protected the user’s hand from touching the hot body of the pot.

Cocoa, a type of chocolate drink, was given a pot of analogous form, which was made around the same time in the Meissen porcelain factory (Fig. 7).

Porcelain cups for 18th century European hot drinks enjoyed a far greater variety of shapes and decor designs. Initially, hot drinks were served in piyāla-type cups, later in beaker- and pear-shaped cups with lids, which kept the drinks warm for longer. These were followed by elongated rectangular cups modelled on oriental patterns. Around the middle of the century, the Rococo-style cups were given embossed decorations (Fig. 9), while at the end of the century, under the influence of the Classicist style, cups acquired  cylindrical form, a smooth body and a handle of geometric forms (Figs. 10, 11).

A special type of cup that today can be seen only in museums is the so-called. trembleuse chocolate cups with lids. Their saucers have an openwork curved band around the well for the cup. This type of chocolate cup with a saucer is typical of the Meissen cups made around 1765 and can be traced in the exquisite chocolate set made in the Berlin porcelain factory at the end of the 18th century, displaying the gold monogram Е of the Russian Empress Elizabeth Petrovna (Fig. 8).

Around the middle of the 18th century, the Meissen porcelain factory began to make sets of porcelain tableware of uniform artistic style. The museum’s collection includes excellent items of a tea and coffee set (Fig. 12) made in the 3rd quarter of the 18th century. The set is remarkable by the fine miniature polychrome painting, complemented by gilding, individual and totally different for each item.

Many of the wares in the Museum used to belong to prominent people in the history of the world, the Baltics and the city of Riga. They are outstanding works of applied art with a memorial, cultural and historical significance. 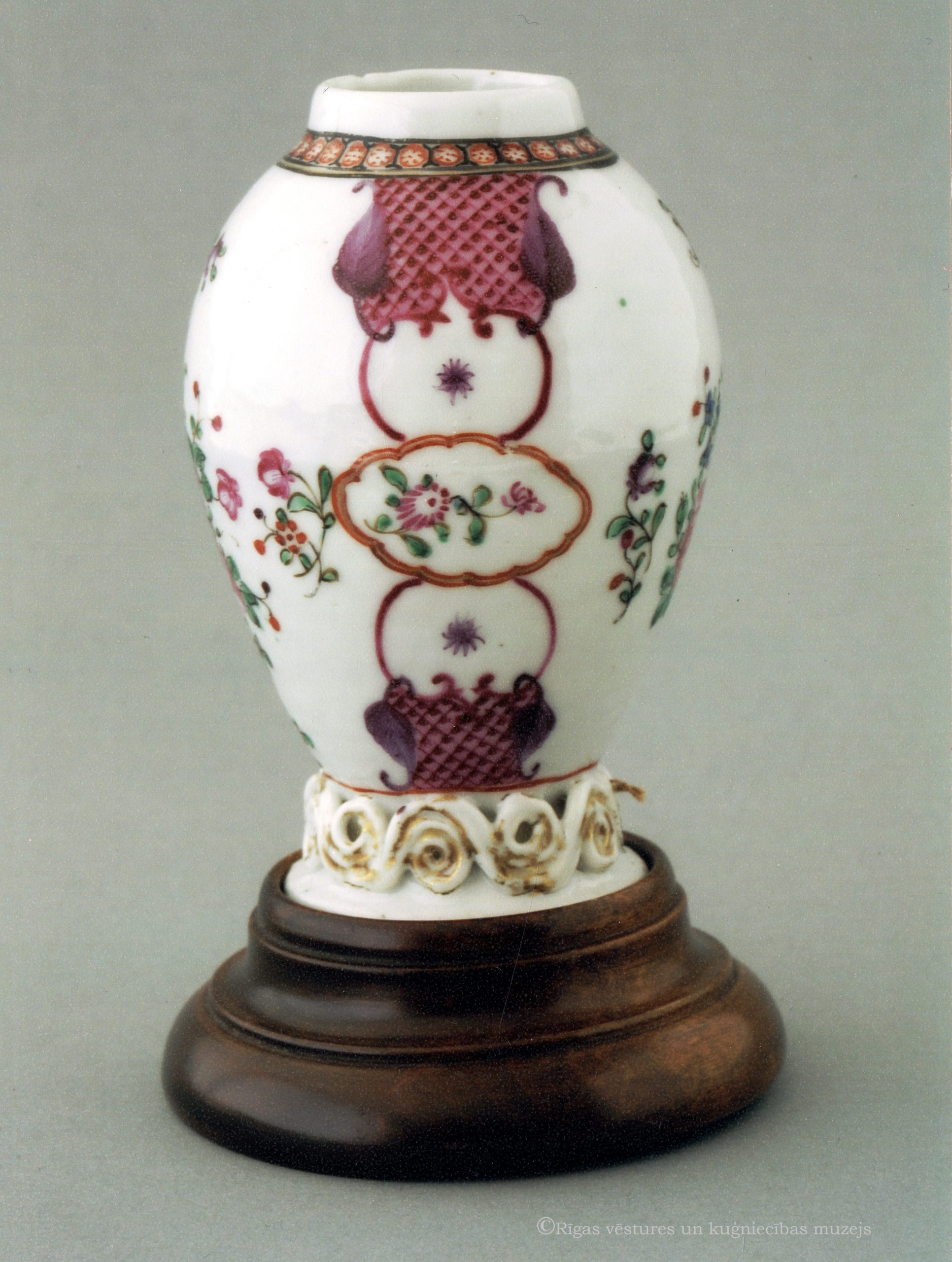 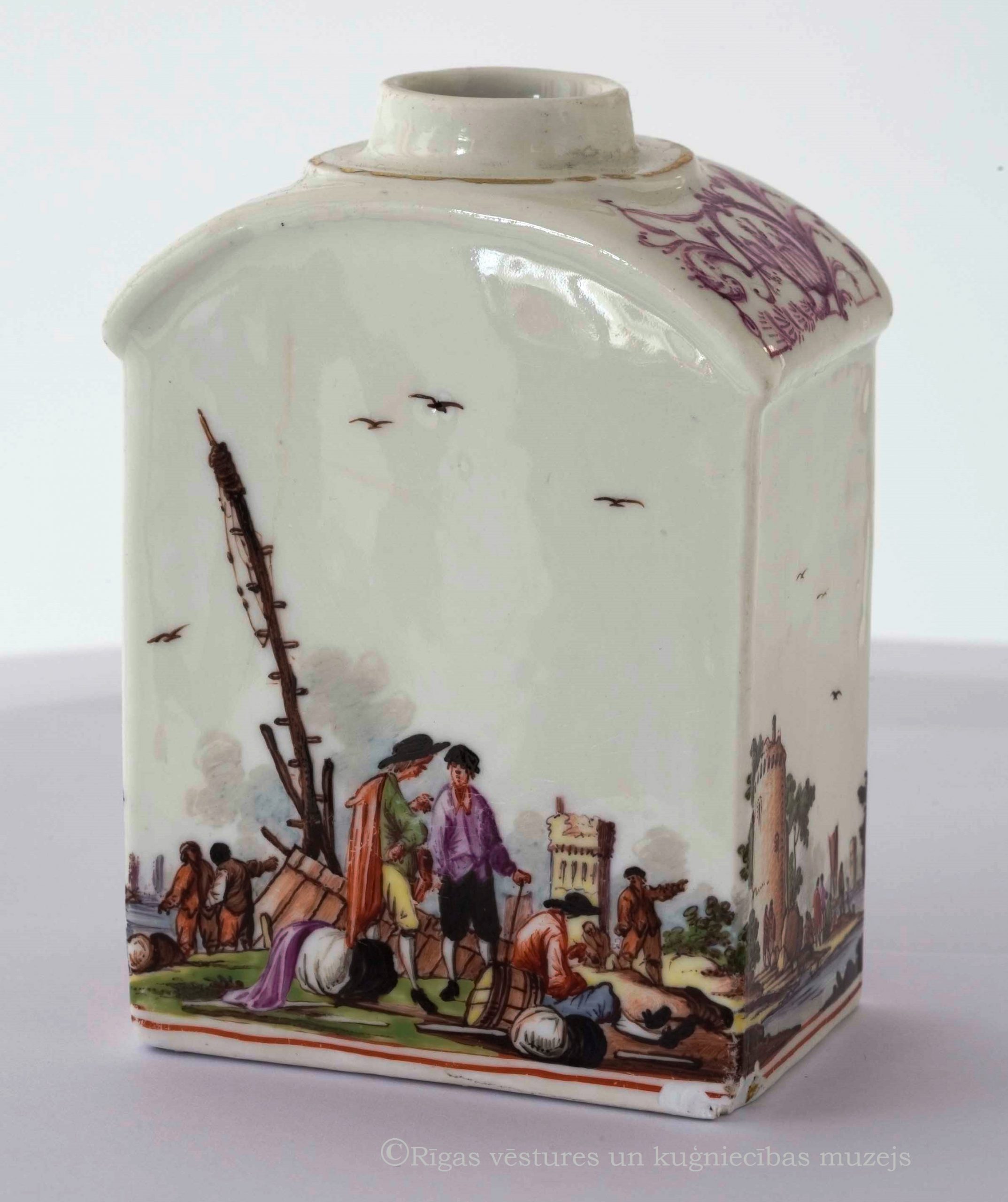 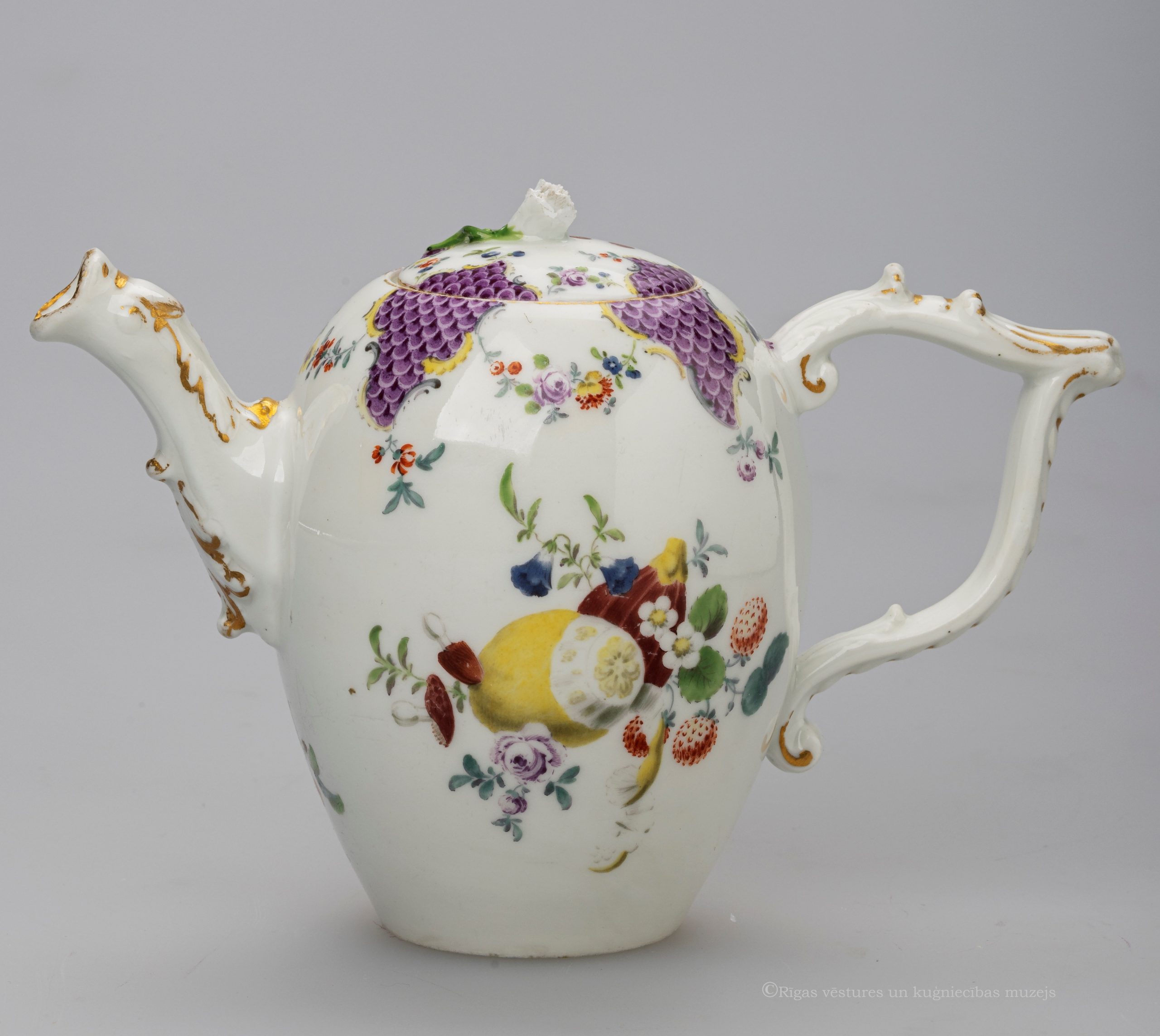 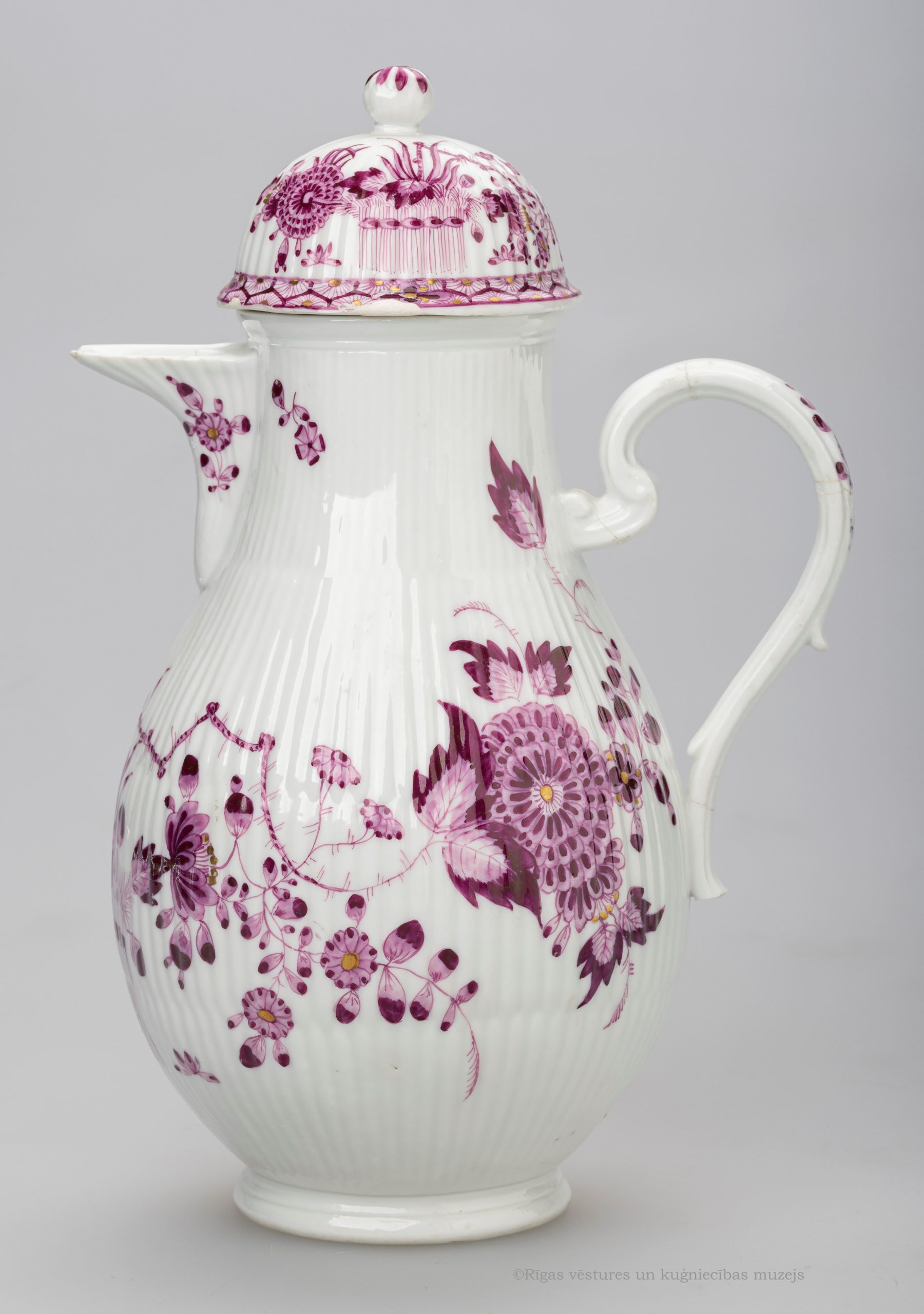 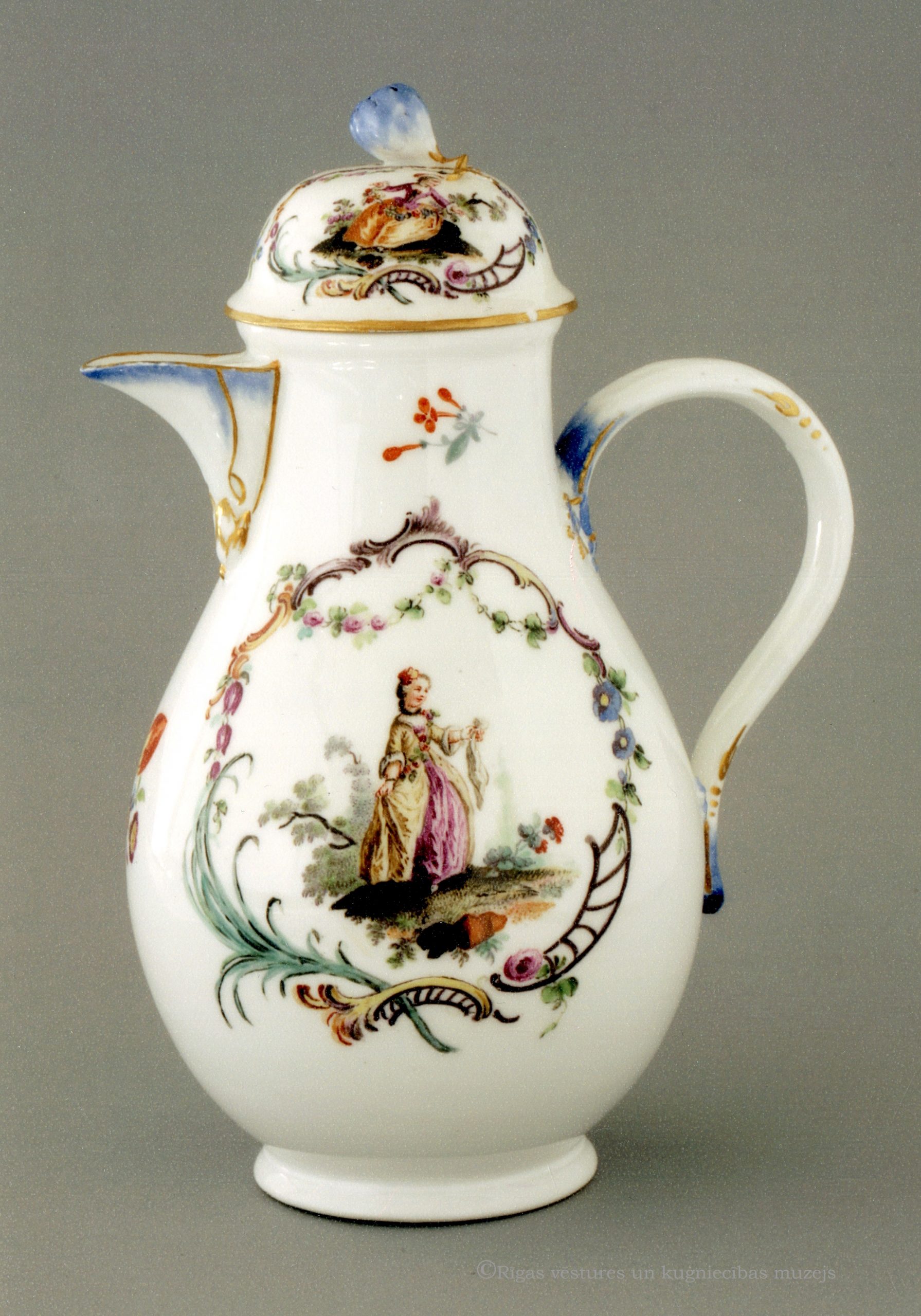 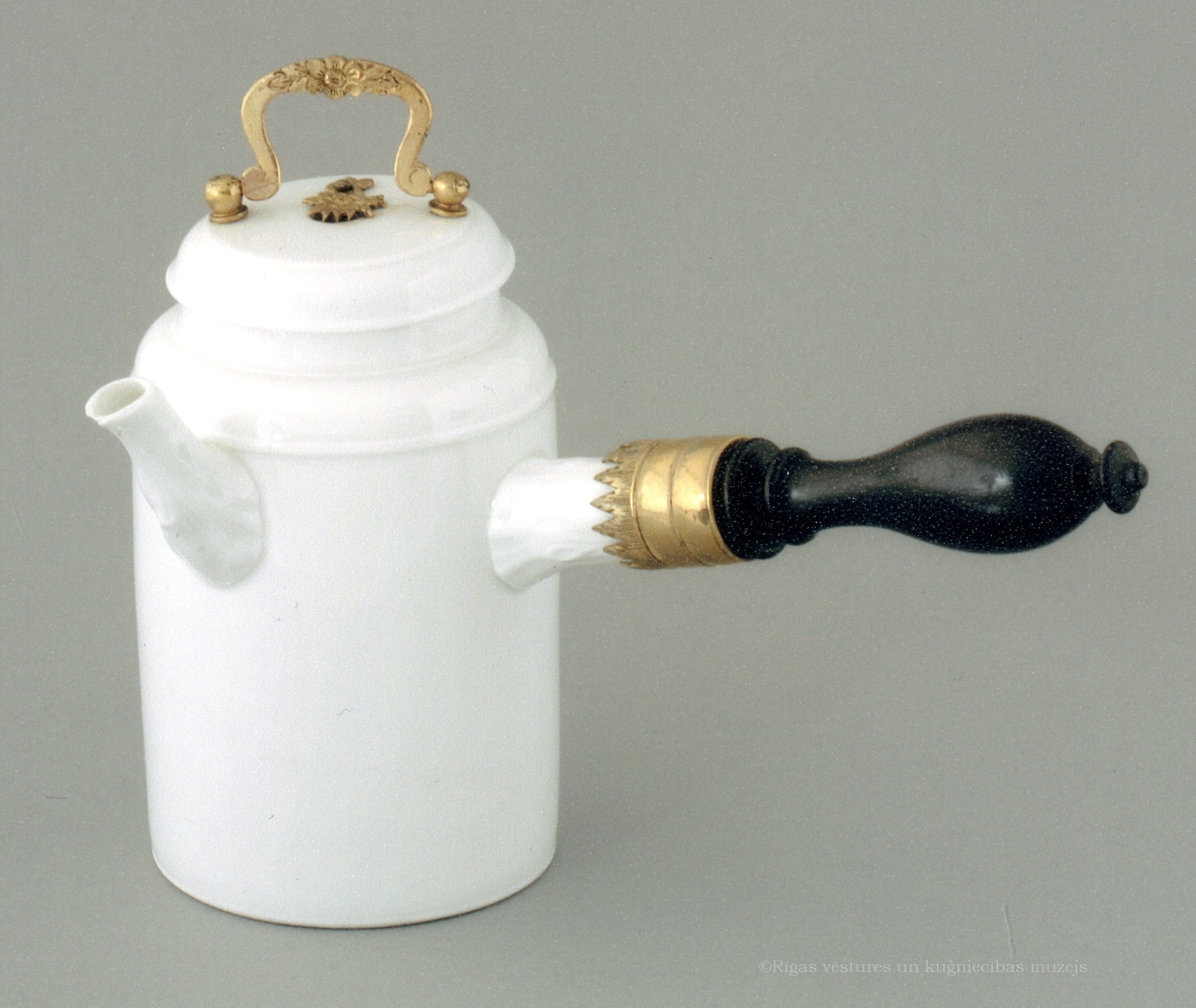 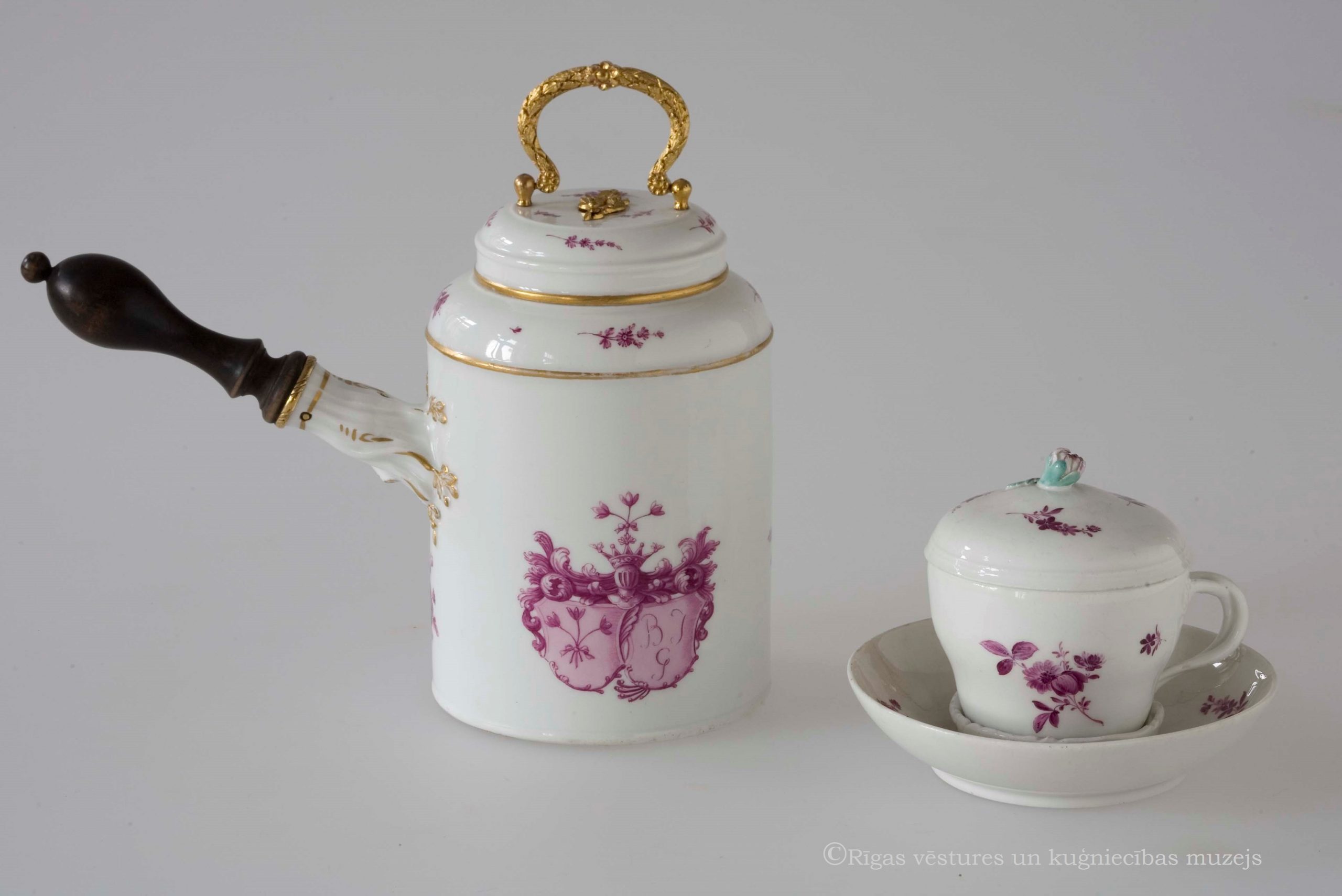 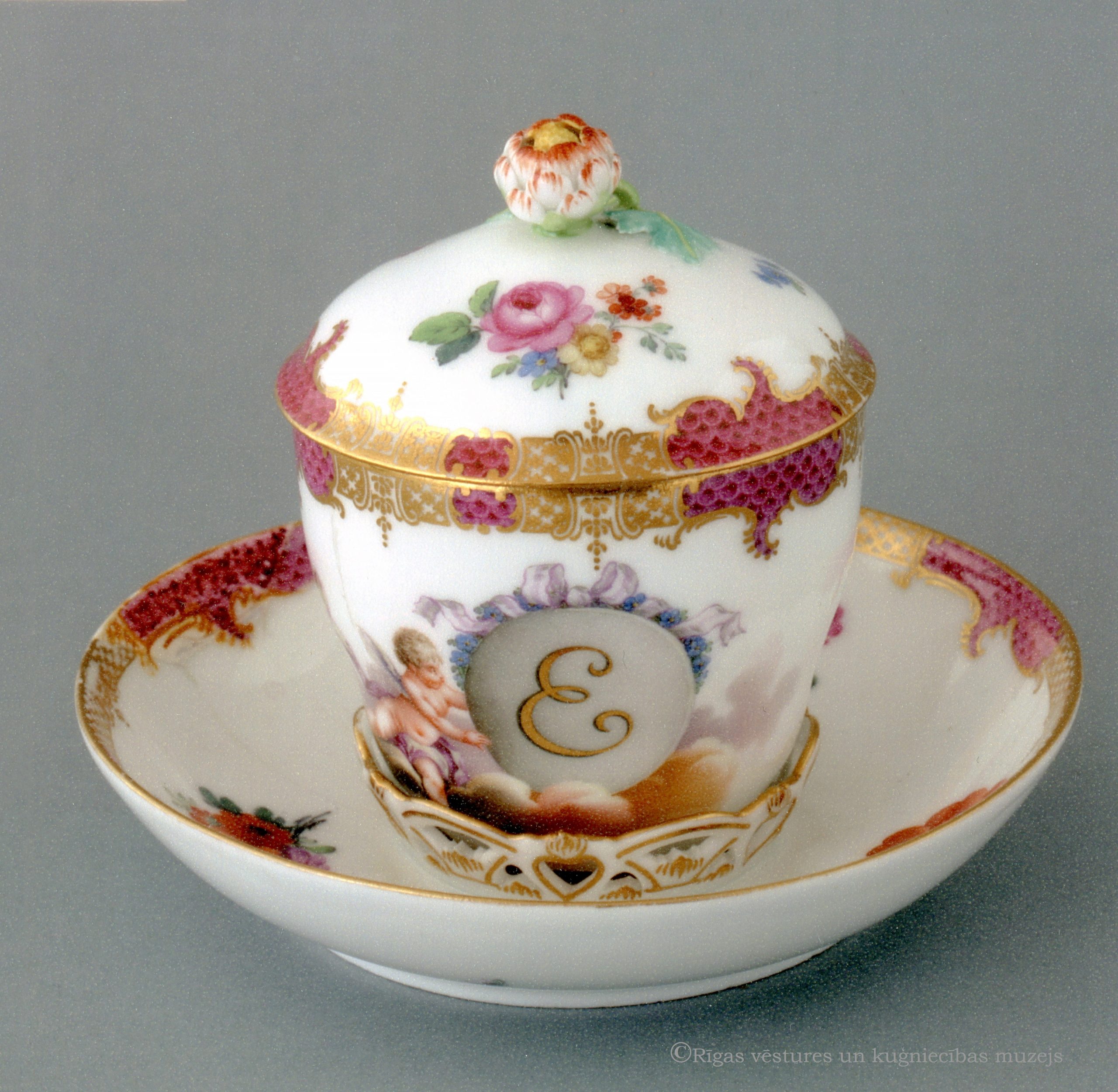 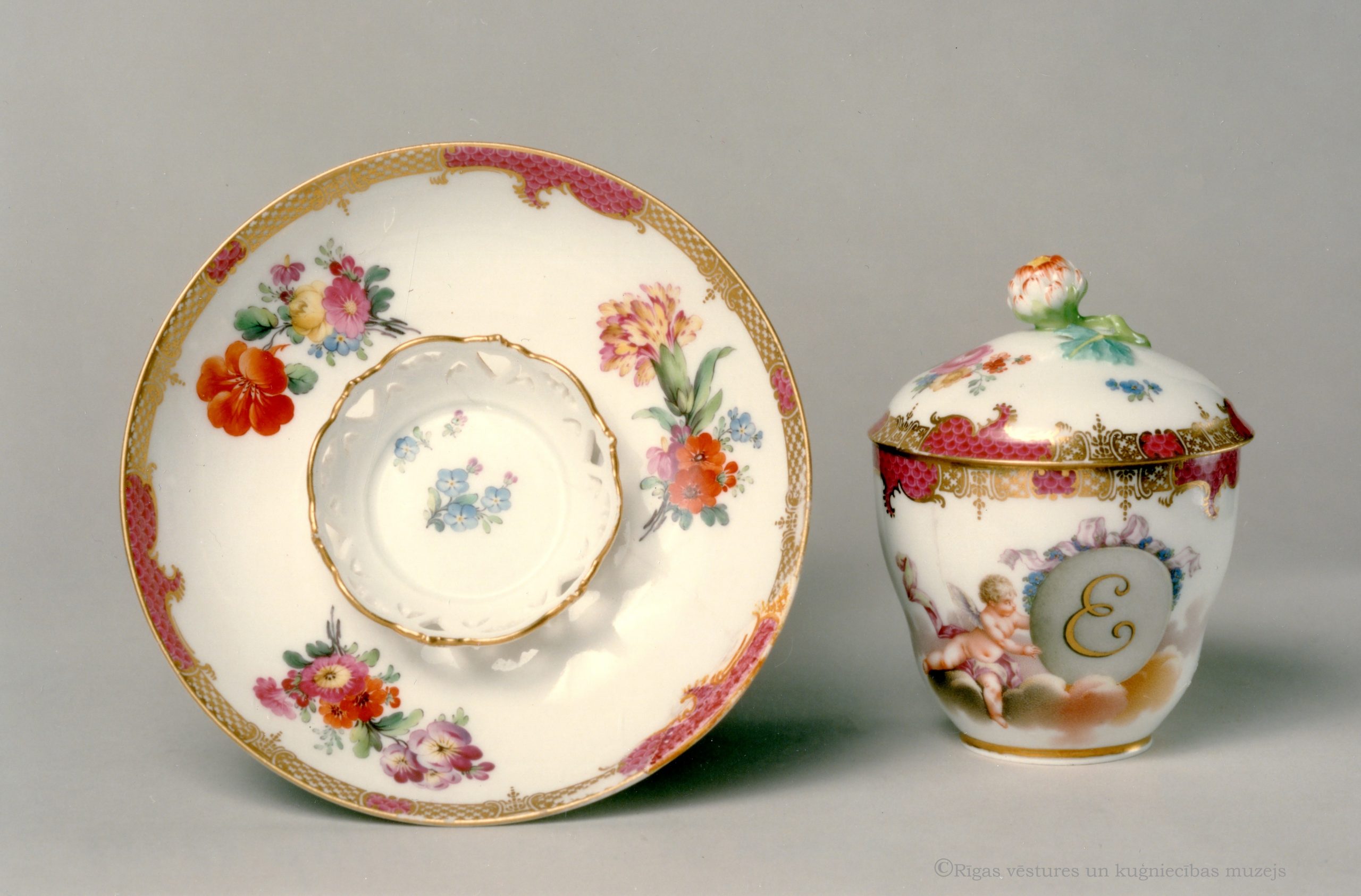 Chocolate cup and saucer.Porcelain, overglaze painting, gilding. Germany, Berlin. 1770s. Purchased at Baron Oelsen’s auction with the funding of the Vidzeme Knightage in 1889. 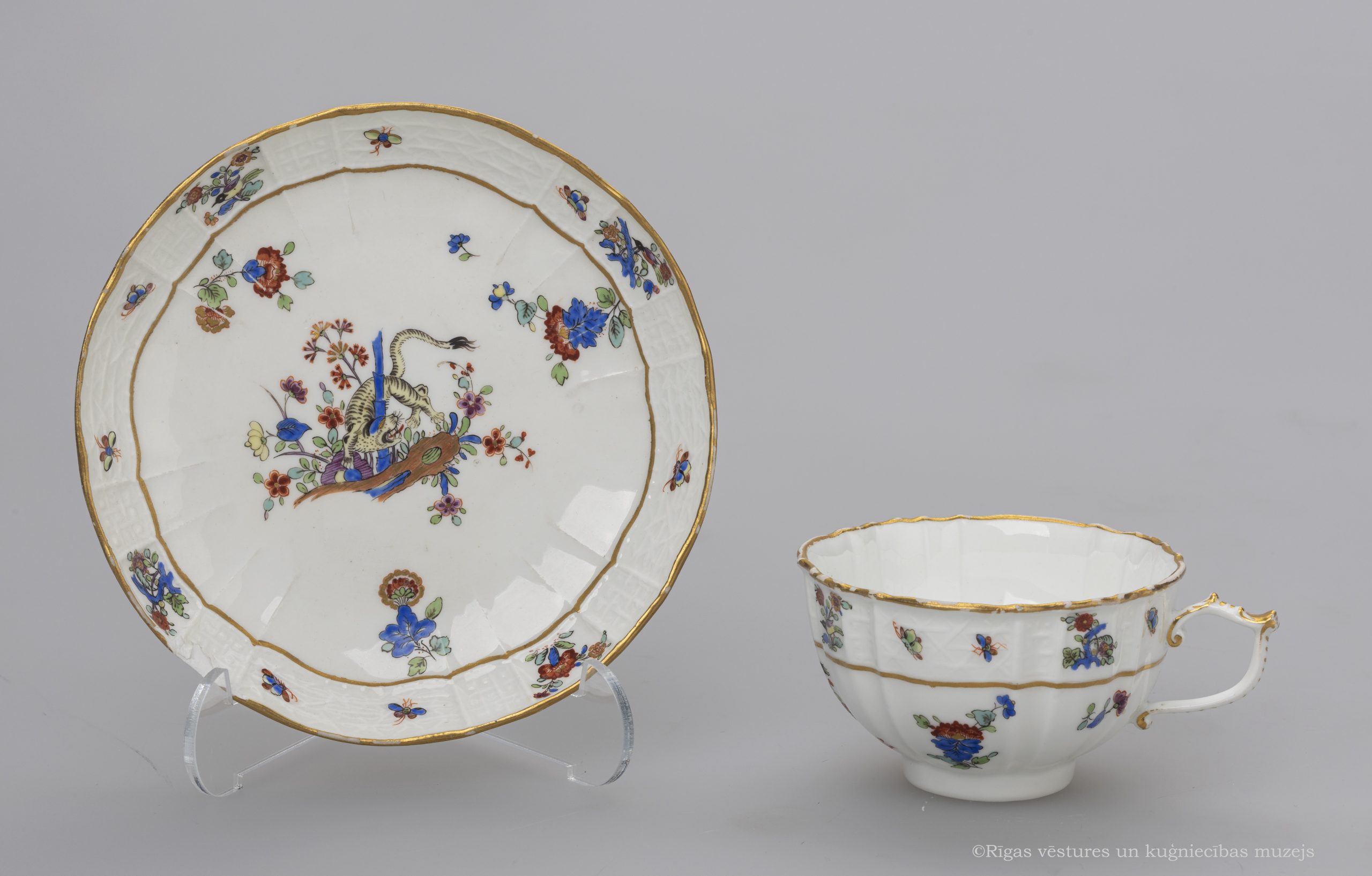 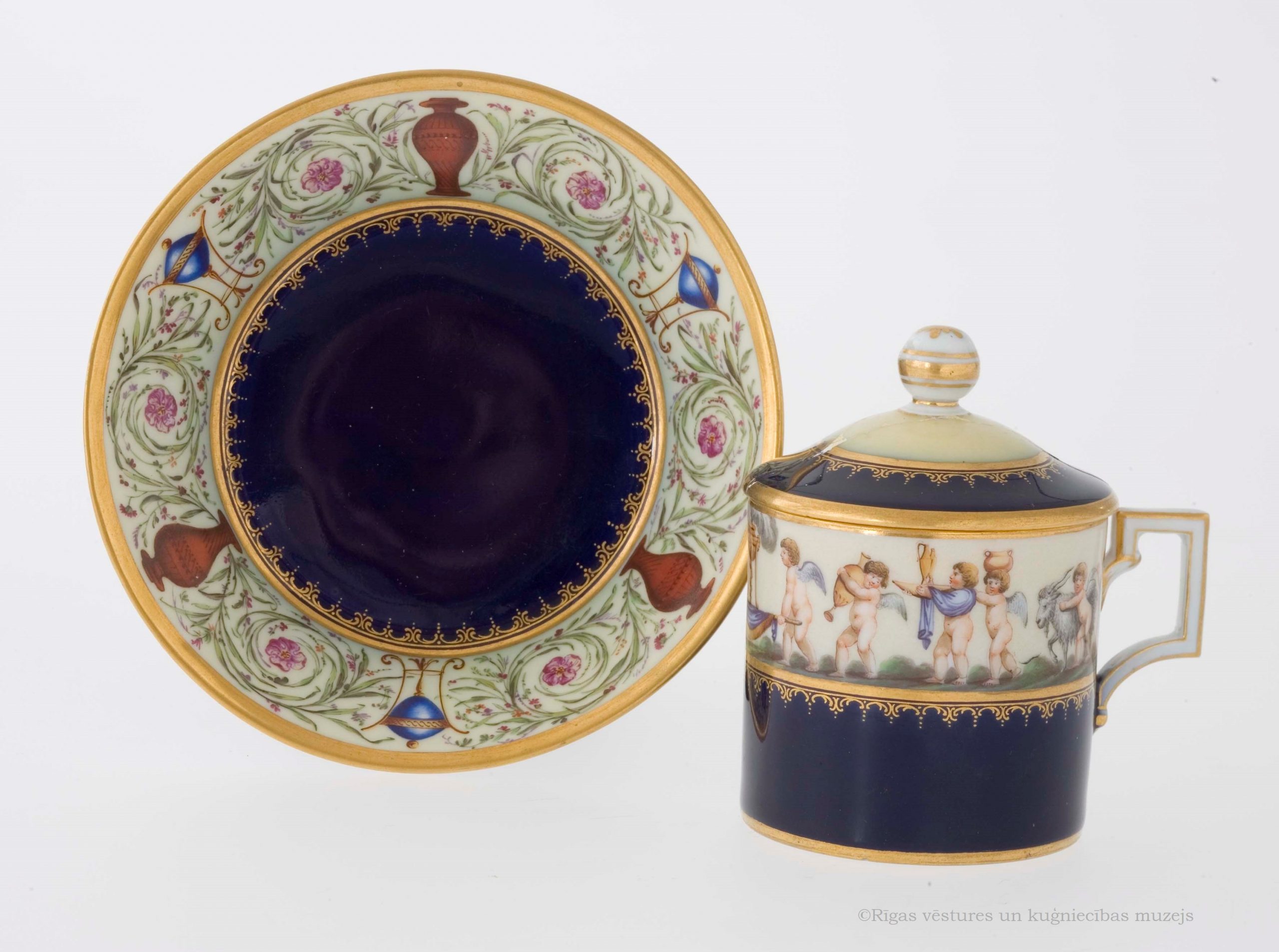 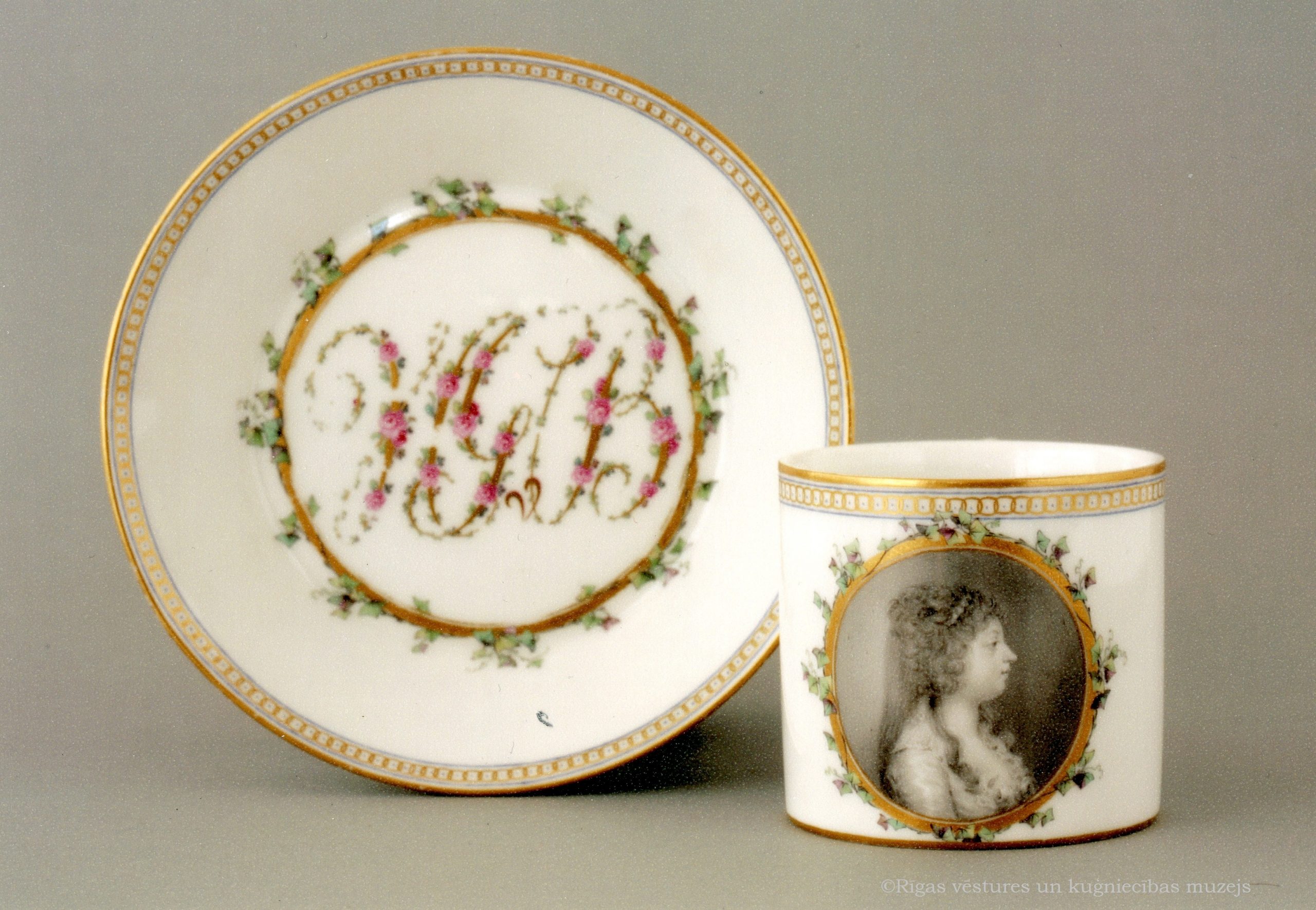 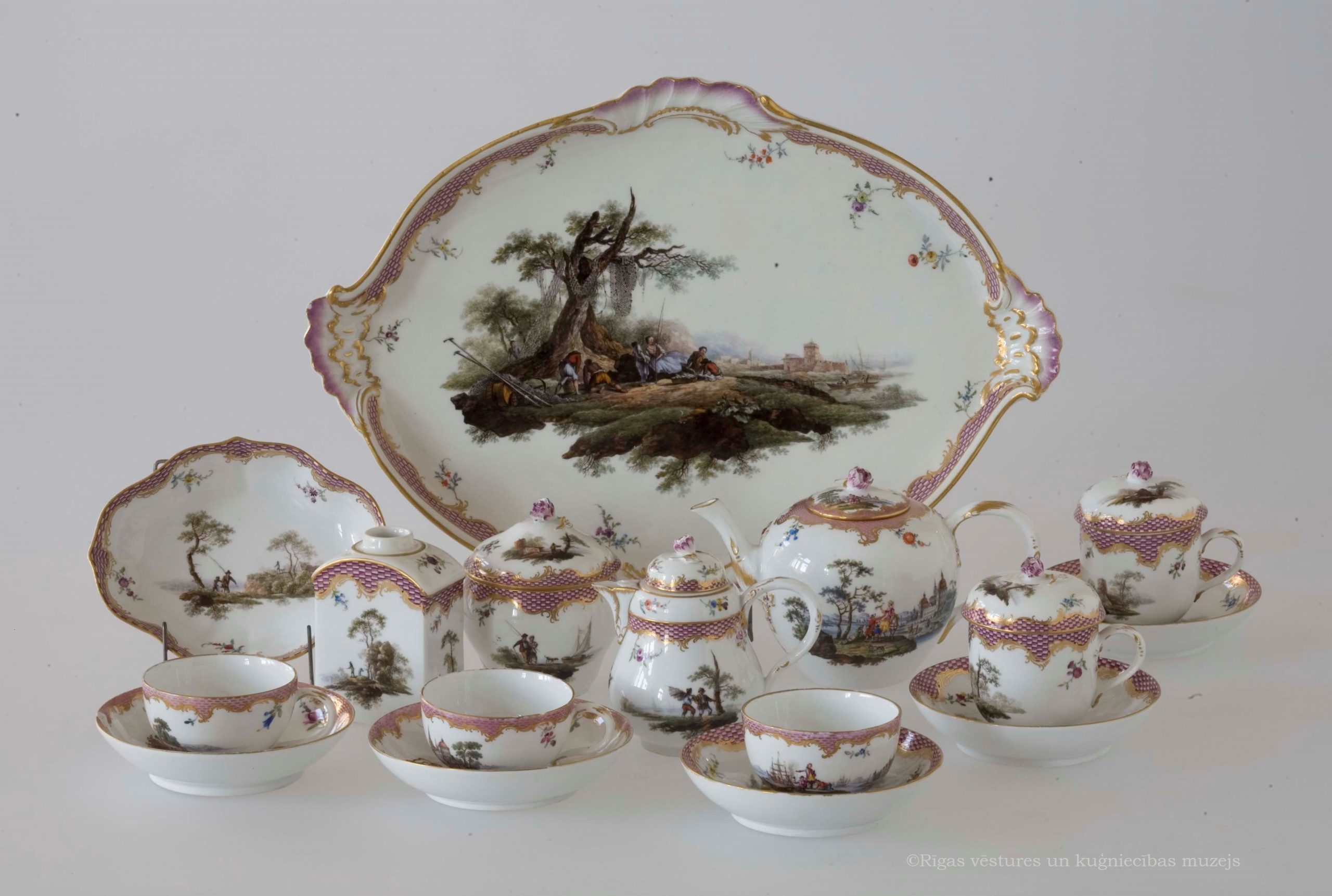