Today the Internet has made available massive amount of information, but until recently the main source was books.

In the Middle Ages, books in the territory of Latvia mostly came from Western Europe, mainly Germany. To begin with, in the 13th century, together with German migrants and merchants, the first books of religious content arrived in Riga, to be kept in the city’s first monasteries and schools, but later also in the city’s libraries (the oldest being “Bibliotheca Rigensis”, 1524).

More than 300 preserved historical bindings (in the collections of Rare Books of the Academic Library of the University of Latvia and the National Library of Latvia, et.al.) demonstrate that the oldest books were massive, ornate works written on fine parchment, protected by wooden covers in decorated leather, with metal fittings and fasteners.

It was only in the middle of the 15th century, thanks to Johann Gutenberg’s invention of book printing, that the number of published books in Europe was rapidly increasing, their subject matter expanding, and the binding changing, i. e. the format and weight of books decreased, and less sophisticated bindings came into practice.

Book printing in Riga started only in 1588, when the printing house of Nikolas Mollyn (1588–1625) from Antwerp, the Netherlands, opened in the city.

In the past, craftsmen of many fields were involved in the creation of books, not only printers, but also tanners, belt-makers, jewellers and many others. The book printer himself very rarely was engaged in binding, it was done by individual craftsmen – bookbinders. It is noteworthy that the statutes of the Riga bookbinders’ guild were approved only in 1630, long after the first printing house was established.

The past archaeological excavations in Old Riga have produce various artefacts, among them also evidence of books – fragments of a total of 5 leather book covers and 56 book fittings or their fragments dating from the 15th century to the early 18th century. The prevailing styles in these centuries were Gothic, Renaissance, Mannerism and Baroque. Historical books often demonstrate elements of several styles because they were not always bound and decorated immediately after their writing was completed.

The leather book covers are unique artefacts that survive only in moist horizons of the occupation layer that are rich in organic substances, which is the case in Old Riga.

The Archaeological Collection of the Museum contains fragments of five ornamented covers that enfold both larger (h = 34 cm) folios and small-format booklets (10×12 cm). Among the finds there is only one almost complete cover, two parts of the covers and another two less vivid fragments. All Riga book covers are made of dark brown calfskin, tanned, 0.1-0.2 cm thick, and decorated with geometric and stylized plant ornaments pressed in the leather. Usually, a frame was marked with a heated drawing-pen along the perimeter of the cover (with 1 to 3 lines), which was then filled with stamps of different ornaments, thus creating larger compositions. However, starting with the mid-16th century, engraved rollers (rolls) and plates were used to decorate book cover surfaces.

15th-16th cent. strap fitting with two nails and a fragment of the leather cover. Location of the find: Dom Courtyard, 1996. Research headed by Andris Celmiņš.

Authors of the virtual exhibition: Viktorija Bebre and Jānis Tereško, Collection work specialists of the Archaeology Department of  the Museum of the History of Riga and Navigation. 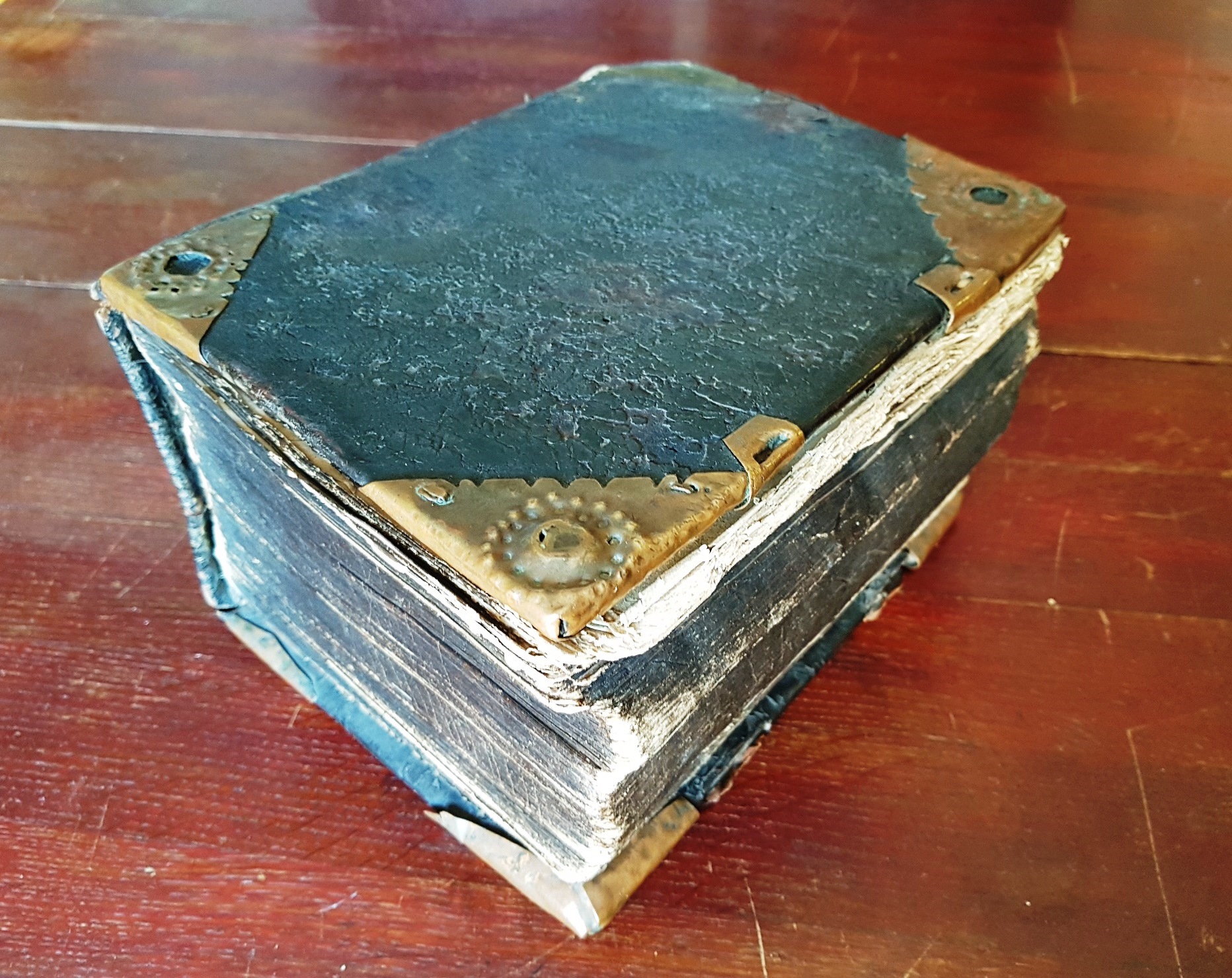 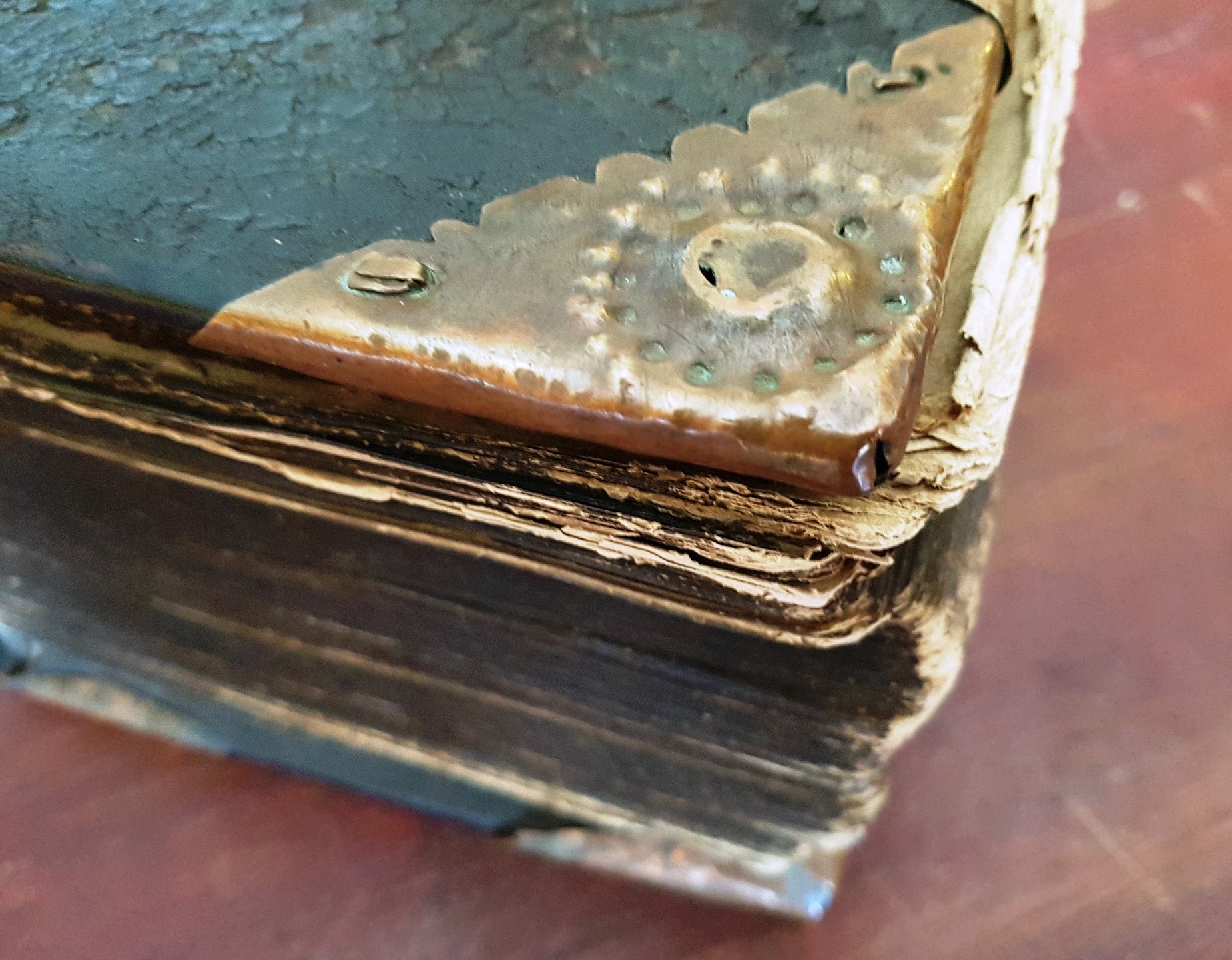 Collection of the Museum of the History of Riga and Navigation also contains books of the described period the fate of which has been more favorable – over the centuries they have found a place in the private or city bookstores of Rigans.

At the end of the virtual exhibition – pictures of two outstanding volumes. 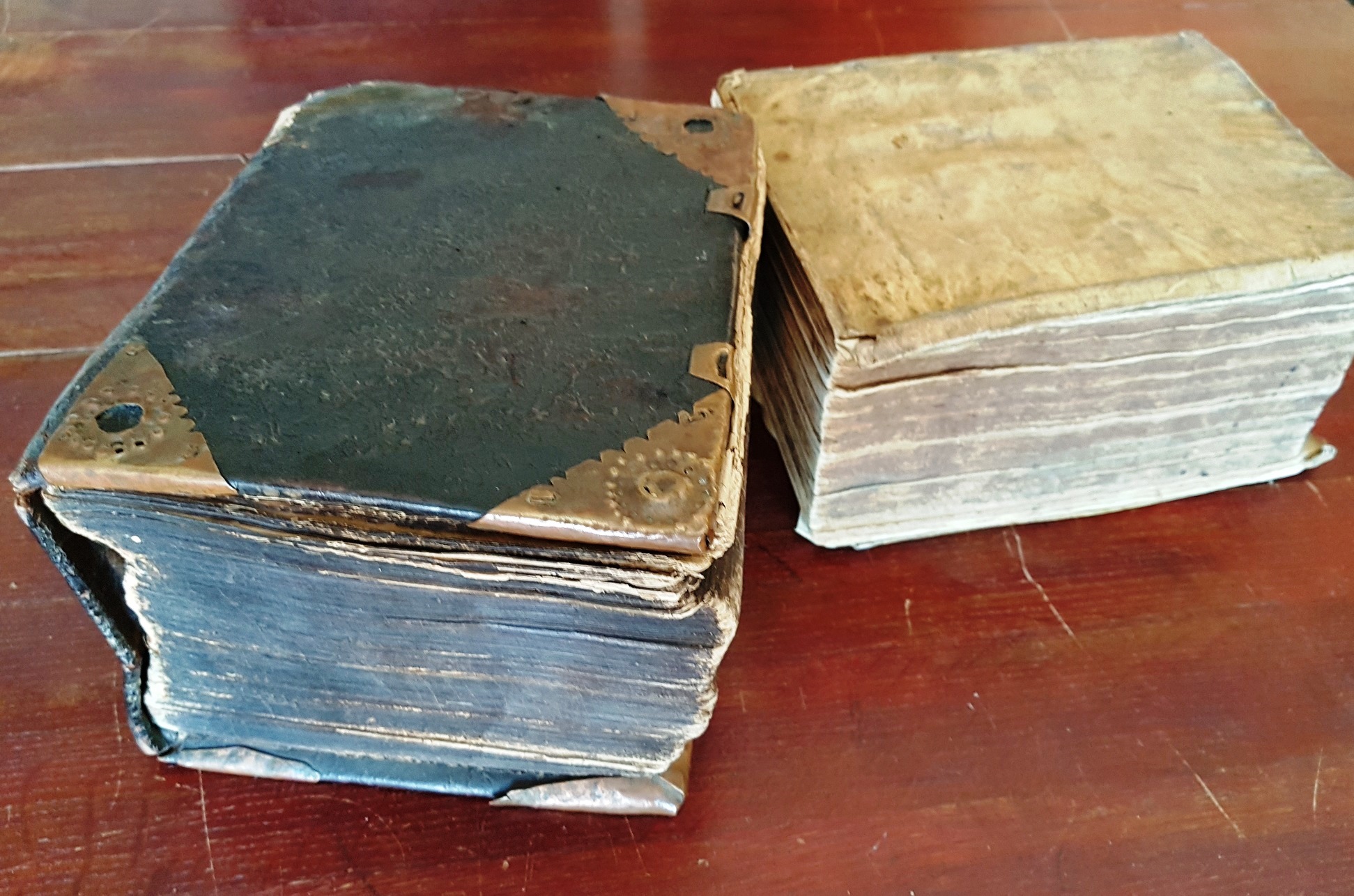 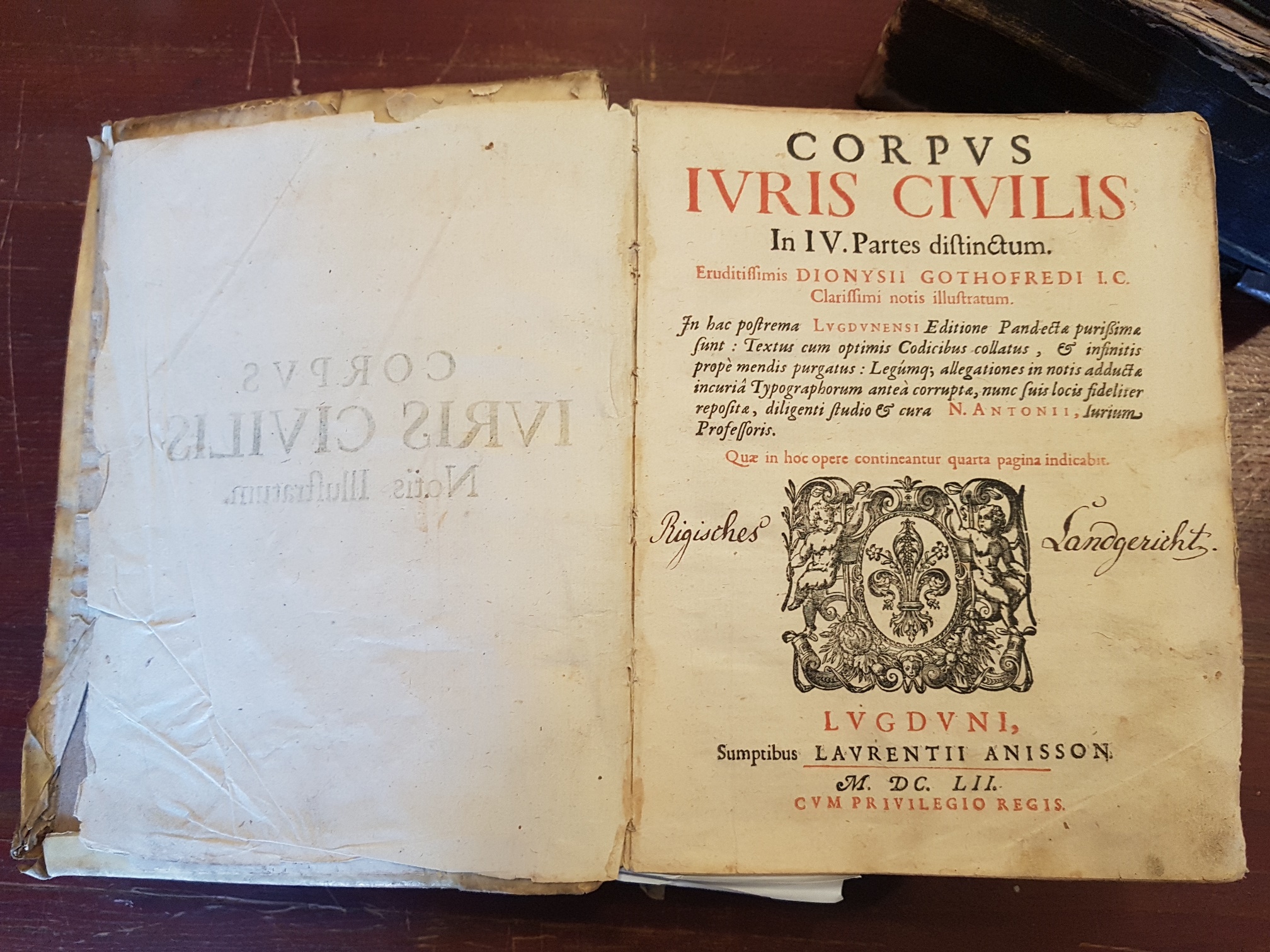