In the territory of modern Latvia, at that time called Livonia, writing and writing utensils came along with Western Christian civilization in the 12th – 13th centuries. Like in the Holy Roman Empire, styles and wax boards were used for writing also in Riga.

The word “style” comes from the Greek word “stylos” and the Latin “stylus”. Wax tablets were called “deltos”, “pyktion” in Greek, and “pugilis”, “tabula”, “cera”, “ceraculum”, “cerae”, “ceraculi”, “tabellae”, “tabulae ceratae” in Latin. These were the first writing implements used by the human race, their history being as old as that of writing. It is believed that writing rods with a pointed tip were used in ancient Mesopotamia. The use of wax tablets for writing was introduced in antiquity.

According to archaeological research, the oldest styles found in Latvia refer to the 12th-13th centuries, but not after the 16th century. The only wax boards known in Latvia so far date back to the 14th century.

The Museum of the History of Riga and Navigation stores over 50 medieval writing instruments – styles, and five unique wax tablets that were used in medieval Riga.

The museum’s collection of styles consists of objects found in archaeological excavations in Old Riga. Most of Riga’s styles were found around the then Dom Cathedral, but especially many objects – 43 – in the courtyard of the Dom Monastery. In 2021 we shall mark 125 years since the collection of the Museum of the History of Riga and Navigation includes wax tablets. An entry about their arrival in the then Dom Museum was made on November 13, 1896, in the inventory book of newly acquired objects. Anton Buchholtz, a custodian of the collection of the Riga Society for the Research of History and Antiquity, donated to the museum three wooden boards with five wax tablets, which were purchased in 1880 from the legacy left by the court councillor Carl von Schmith. The Riga wax boards are special because their origin is not archaeological. In 1896, Nikolaus Busch a corresponding member of the Russian Imperial Society of Archaeologists and the Riga Dom Museum inspector, in his article “Wachstafeln des Rigaschen Dommuseum” emphasized that this was one of the most interesting museum offers, but there was no information of its recent past. In the Middle Ages, various occasional notes of no lasting value were recorded on wax tablets, such as everyday notes, draft documents, invoices, private letters, etc. These objects were of particular application in medieval schools where students learned to write. Due to the content, the tablets were not preserved, so very few have survived to our day.  The styles are mostly made of iron, bronze or bone. The medieval style has a pointed tip for writing, a cylindrical handle and a widened flat top – a spatula that was used to smooth the wax and erase characters. The Riga styles are characterized by various shapes of spatulas, while the cylindrical stems are often ornamented. In appearance, they are similar to the writing instruments found in the coastal countries of the Baltic Sea. The large number of finds of styles in the courtyard of the Dom Monastery, which served also as a burial place in the Middle Ages, is principally explained by the location of the Dom School, an educational institution in the building complex, rather than by the burial traditions. However, in two burials in the cemetery, the styles constituted grave goods. In one case, the deceased was given even two styles and a spherical metal dish for melting wax. The two buried men may have been scribes or teachers at the Dom School. It is believed that the Riga styles and wax tablets were imported from Western Europe or locally made imitating the samples of imported items. 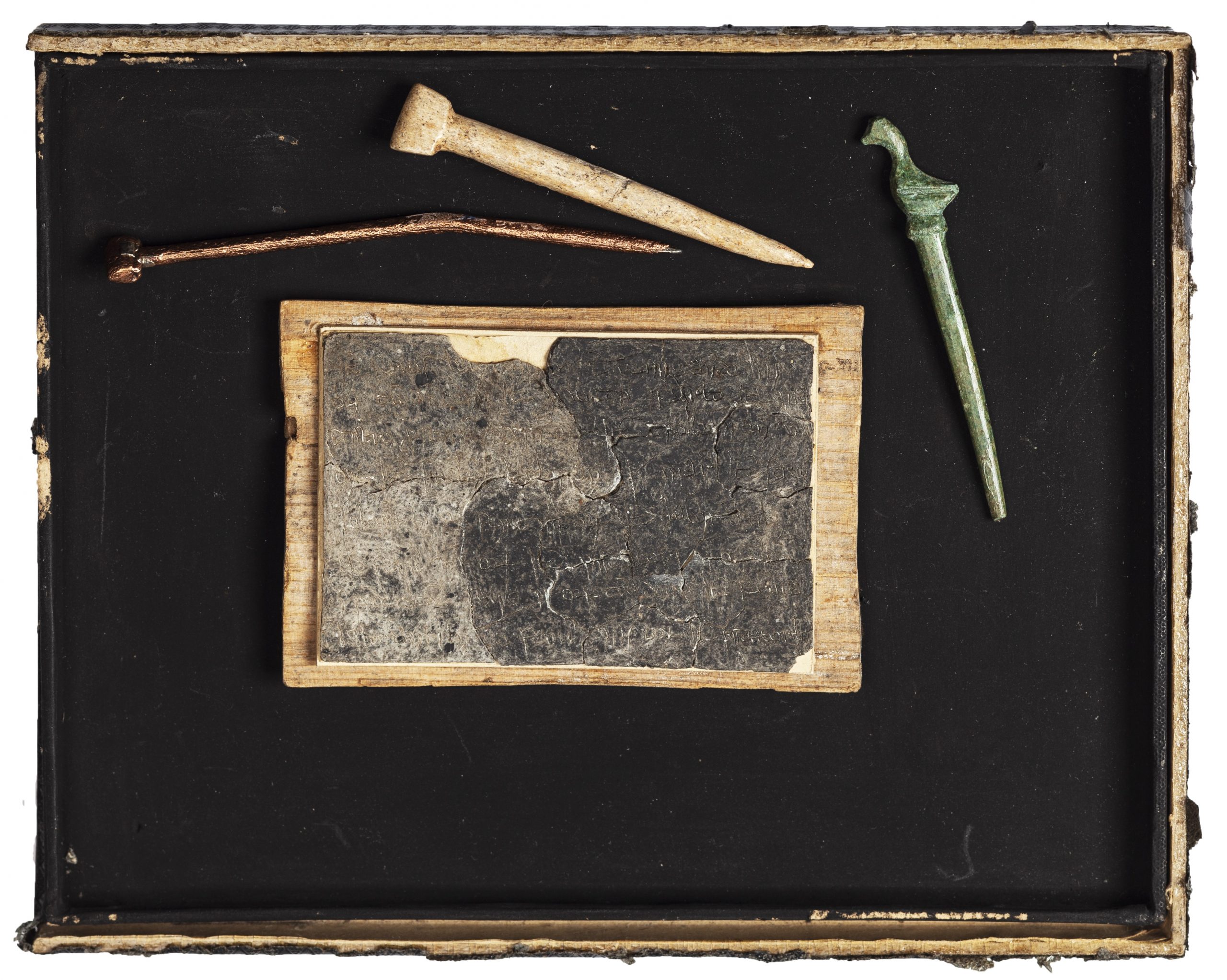 Excerpt from the exhibition “Writing Implements of Medieval Riga”